Bhoot Police is the upcoming horror-comedy starring Saif Ali Khan, Arjun Kapoor, Jacqueline Fernandez and Yami Gautam in the lead. The team recently flew to Dalhousie, Himachal Pradesh, for the shoot of their film. And today, November 4, the makers have shared a quirky, spooky poster and announced that shoot of Bhoot Police has commenced. 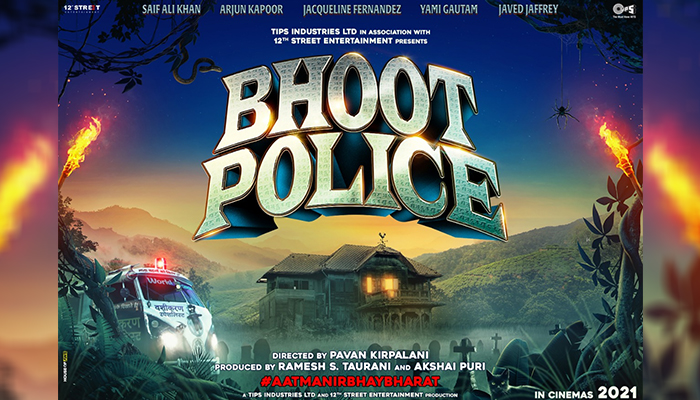 The poster highlights the logo of Bhoot Police. It shows a spectacular view of the hilly area in the backdrop. The poster also focuses on a dilapidated bungalow that is in the middle of a graveyard and in the front yard there is also an ambulance parked with its siren all lit up. The poster is indeed an intriguing one and now we just cannot wait to see the avatar of the lead cast.

Bhoot Police is written and directed by Pavan Kirpalani and is bankrolled by Ramesh Taurani and Akshai Puri. This film marks the first collaboration of Saif Ali Khan with Arjun Kapoor and Yami Gautam. He has shared screen space with the Sri Lankan beauty Jacqueline Fernandez in the film Race 2.

Talking about Saif and Arjun’s role in this film, director Pavan had stated, “Both of them will be seen in very different avatars and will bring their trademark humour to the script.”