John Abraham’s much-awaited Batla House has registered a solid 4-days extended opening weekend. After a drop in footfalls on its second day, it managed to remain almost steady throughout despite having highly-anticipated Akshay Kumar starrer Mission Mangal in its parallel. 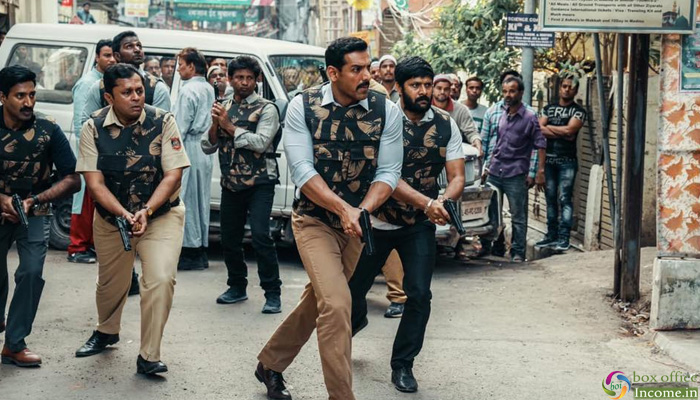 Produced by T-Series, Emmay Entertainment, John Abraham Entertainment & Bake My Cake Films, Batla House stars Ravi Kishan & Mrunal Thakur in lead roles along with John. The movie has received positive reviews from the critics, being a mass entertainer got succeed to entertain the audience.

Directed by Nikhil Advani, Batla House was released amid the huge excitement of fans and surprisingly opened on an amazing note. On Thursday, it did the business of 15.55 crores and become the 8th highest opener of the year so far in Bollywood.

On Friday, due to normal working mid-week day, Batla House witnessed a normal drop in footfalls like the adjacent release and did the business of 8.84 crores. After that, it managed to take to some growth and minted the amount of 10.90 crores on Saturday.

On the next day i.e. Sunday, John starrer recorded a solid growth of 16.83% and garnered the business of 12.70 crores. After the weekend, the total collection of Batla House has become 47.99 crores nett at the domestic box office.

However, Nikhil Advnai’s production company Emmay Entertainment has continued to make interesting films, last being Baazaar which was a fair success at the box office. Now Batla House has turned out to be a profitable venture already.