After an almost decent opening weekend, Hindi crime drama Article 15 is heading steadily on weekdays despite mixed reviews from critics, a bunch of new offerings & last week’s much-liked Kabir Singh in its opposite, it is getting a good response from the audience in metro cities. 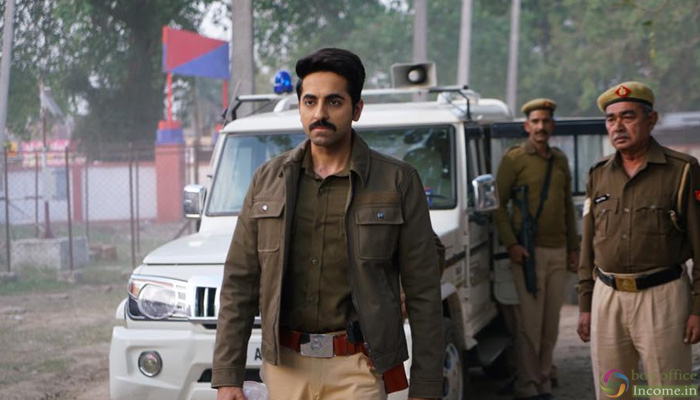 Directed by Anubhav Sinha who had directed critically-acclaimed Mulk, the Hindi crime drama has got succeed to impress many in theatres and received mostly positive reviews from the critics. While some haven’t found it convincing despite the excellent performance of all the actors.

On Friday, Anubhav Sinha’s directorial opening on a slow note, but somehow managed to pick up decently post noon shows and registered the opening business of 5.02 crores. Then over the weekend, it took a fair jump and minted the amount of 7.25 crores on Saturday & 7.77 crores on Sunday.

Now, Article 15 is running on weekdays and as usual getting lower footfalls in theaters. On Monday, it faced a drop of 20.92% than Friday and collected 3.97 crores. On Tuesday, with slight more decline, the movie managed to collect the amount of 3.67 crores.

On the next day i.e. Wednesday, Zee Studios & Benaras Media Works’ presentation got dropped further and bagged the amount of 3.48 crores. With this, the total collection of Article 15 after 6 days, has become 31.16 crores nett at the domestic box office.