Superstar Ajay Devgn has shared first look poster of upcoming sports drama film Maidaan. Directed by Amit Ravindernath Sharma, it is based on the Golden Era of Indian Football at 1952-1962. Well, the film is kickstarting today and we are sure that the film will definitely surprise us. 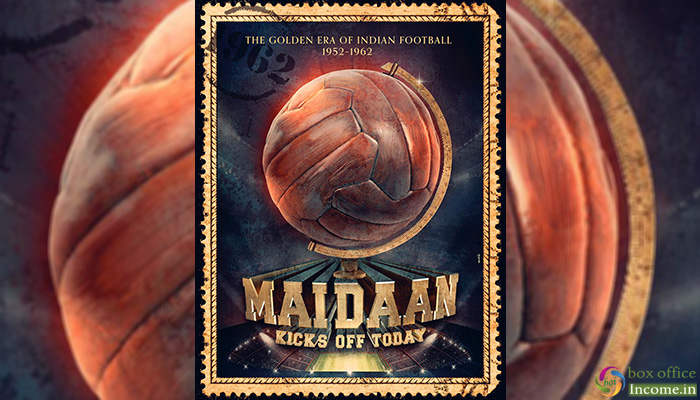 On August 19th, producer Boney Kapoor shared the picture of Maidaan. He caption the picture, “Proud to kick off the Untold Story of The Golden Years of Indian Football. Hope to bring glory to India with this fantastic story. @ajaydevgn, @Maidaanofficial, @iAmitRSharma, @keerthyofficial, @freshlimefilms, @saiwynQ, @writish, @zeestudios_, @ZeeStudiosInt”.

Ajay Devgn will step into the shoes of Syed Abdul Rahim to tell the story of this unsung hero who was responsible for taking Indian football to new heights and winning accolades for the country. However, Boney Kapoor had earlier said that the shoot will take place in Delhi, Lucknow, Kolkata, Mumbai and two abroad locations from Rome, Melbourne and Jakarta.

Devgn is already prepping for Bhuj: The Pride Of India. He will play Squadron Leader Vijay Karnik, who was the supervisor of Bhuj airport in Gujarat during the Indo-Pak war of 1971. He also recently announced the historical drama Taanaji: The Unsung Warrior, which will feature him in the titular role. Helmed by Om Raut, Tanaji will see Saif Ali Khan play the antagonist in the film.