The beloved Bollywood couple Gurmeet Choudhary and Debina Bonnerjee have got married again and their wedding pictures are giving us major couple goals! On the event of the release of the romance drama Subho Bijoya via the revolutionary OTT platform Biiggbang, the movie will star the couple and is helmed by Director Ram Kamal Mukherjee. 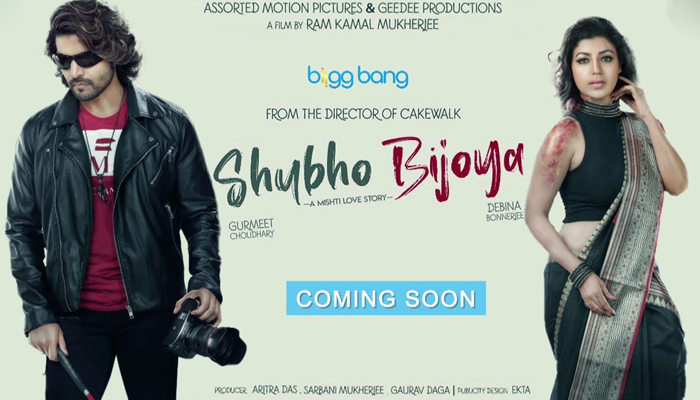 Ram Kamal Mukherjee also played cupid and got the couple to relive their wedding day via a special Bengali wedding sequence. The couple was shooting for their Hindi short film Shubho Bijoya, where the two had to shoot for a wedding scene which was originally planned as a part of a fleeting montage. It was only when Debina expressed her life-long dream of having a Bengali wedding, that the director decided to surprise them.

Shubho Bijoya is a love story that revolves around a fashion photographer and a supermodel. Produced by Aritra Das, Gaurav Daga and Sarbani Mukherjee, the film is a tribute to O Henry. The romantic drama will stream on 15th October, only on the short-format OTT platform, Biiggbang.

Debina says, “Gurmeet and I are coming back on the screen after a good 11 years with a short film that is extremely close to our hearts, ‘Shubho Bijoya’. I was impressed with the minor detailing that Ram Kamal took while shooting for this film Shubho Bijoya. The gestures and the extra mile he went for, was overwhelming for Guru and me. This is one of the main reasons Shubho Bijoya is a film close to my heart. Shooting for the film too was a surreal experience and we have created many memories with this small film with a big heart!” she added.

Actor Gurmeet Choudhary says, “This is my first short film and kind of an OTT Debut. I am so happy that Debina and I had started our journey in the entertainment world together and now our OTT debut with one another as well. Shooting for the short film overall has been an amazing and enriching experience for us as actors. What’s truly the icing on the cake is Debina and me collaborating after more than a decade! After Ramayan, we are now going to be onscreen for Ram Kamal’s Shubho Bijoya and it’s almost like our homecoming which is making it even more exciting!”