Actor Taapsee Pannu is turning producer. After working for more than a decade in Indian cinema, Taapsee adds another milestone in her career, as she launches her production house Outsiders Films. For Outsiders Films, she has joined forces with Pranjal Khandhdiya who is a content creator and producer for over 20 years. As her first venture, the actress will co-produce her next film. 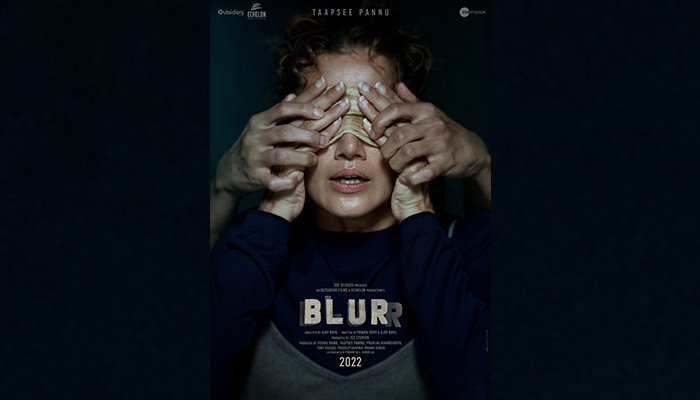 Taapsee first film as a producer, also has her headlining the cast, titled – Blurr. To be directed by Ajay Bahl, who previously helmed Section 375 with Richa Chadha and Akshaye Khanna, the thriller is also likely to feature Gulshan Devaiah in a pivotal part along with a few other promising names.

Shariq Patel, Chief Business Officer, Zee Studios shares, “We are happy to share the first look of our project with the audience. It’s exciting to see Taapsee and Ajay, two of the most creative people come together to create magic with Blurr. The script is unique and highly engaging, and we are all looking forward to the journey ahead.”

After delivering many successful thrillers herself, Taapsee Pannu turns a producer with her partner Pranjal Khandhdiya from Outsiders Films. She shares, “Blurr is the just kind of script I was waiting for. I’m delighted to be finally turning a producer with this film and with the support of co-producers and team, I’m sure it’s going to be an enriching journey. Collaborating with Ajay is as exciting as it gets as I’ve seen his work. He is the best to bring the gripping story of Blurr on-screen”.

Vishal Rana from Echelon Productions shares, “Blurr is one of the best scripts I’ve ever read. Being a big fan of thrillers myself, I wanted to make this film in a certain way that would amaze the audiences. With Ajay Bahl directing and Taapsee leading the star cast, we have been blessed with the best talent from the industry coming together to make this film. With Zee Studios, we found the perfect partners and now we can’t wait to take this amazing journey of making this film together”.

The Spanish thriller is directed by Guille Morales. The film tells the story of a woman who’s slowly losing her sight whilst trying to investigate the death of her twin sisters. Julia’s Eyes is also being remade in Bengali, Telugu, Tamil, and Marathi languages. This will be Taapsee’s second Spanish remake after Badla (2019) which was a remake of The Invisible Guest.

The film is being produced by Vishal Rana and Anthony Dsouza of Echelon Productions, Pranjal Khandhdiya of Mango Purple Media Network in association with Zee Studios. On the film front, Taapsee is set for a season chock-a-bloc with her next Looop Lapeta, Rashmi Rocket, DooBaaraa, a south film, Shabaash Mithu, and with many under the pipeline.