After creating waves as a high-octane action film, superhit movie franchise, ‘Commando’ is all set to be adapted into a series on Disney+ Hotstar. Backed by the franchise mastermind, Vipul Amrutlal Shah, the series will retell the action saga in an all-new format. 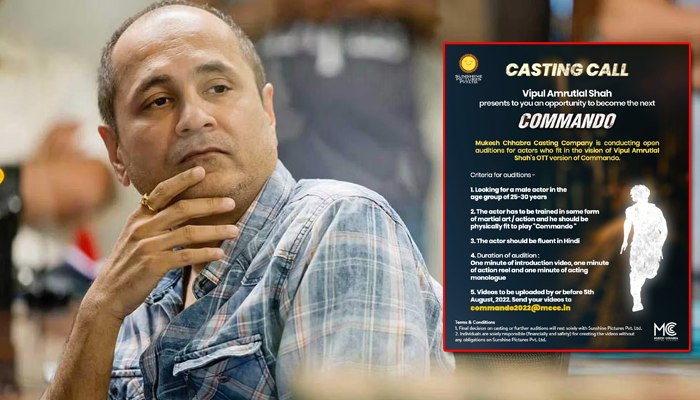 As per the new development, Vipul Shah, who is known for providing opportunities to fresh young talent in Bollywood, has once again presented an opportunity to the aspiring actors to become the next Commando in his highly anticipated series.

Interestingly, ace casting director Mukesh Chhabra’s Casting Company is conducting open auditions for actors who fit in the vision of Vipul Shah’s OTT version of Commando. Sources suggest that the production house is looking for a male actor who has been trained in some from or martial art or action and he should be physically fit to play Commando. Interested candidates are required to send their introduction video along with their action reel and acting monologue to commando2022@mccc.in

This adaptation will set a trend in India by becoming the first film franchise to progress into a digital series. The new show will feature Para SF Captain’s adventures in finer details, giving viewers a close look at his life and mission. The official announcement proposes a big opportunity for talented men out there, and the criteria’s are very clear as mentioned below:

1. Looking for a male actor in the age group of 25-30 years
2. The actor has to be trained in some form of martial art/action and he should be physically fit to play “Commando”
3. The actor should be fluent in Hindi
4. Duration of audition: One minute of introduction video, one minute of action reel and one minute of acting monologue
5. Videos to be uploaded by or before 5th August, 2022. Send your videos to commando2022@mccc.in

Sunshine Pictures Private Limited is a venture founded and promoted by Mr Vipul Amrutlal Shah, who is a reputed producer and director of Films and TV shows, and has been a leading member of the entertainment industry in India for over two decades now.