Hrithik Roshan and Saif Ali Khan starrer Vikram Vedha are all set to release worldwide on September 30, 2022. The teaser of the film gave viewers a glimpse of the characters of Vikram & Vedha while introducing the audience to the intriguing story. Now, the actors are gearing up for the trailer release on September 8, 2022. 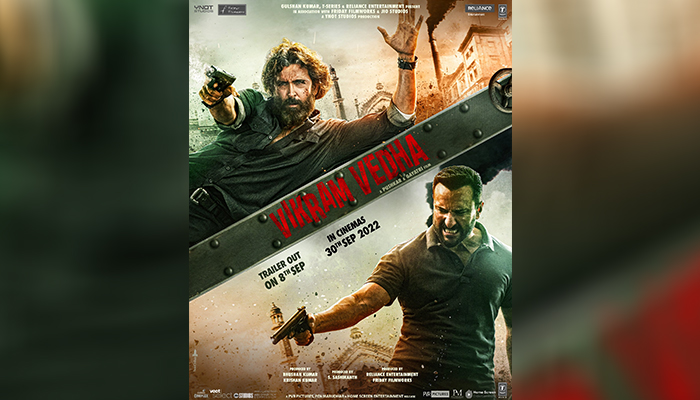 Hrithik Roshan on Sunday took to his Twitter account to share new posters along with the announcement that the much-awaited trailer will be out on this Thursday. “इस बार सिर्फ मज़ा ही नहीं, ताज्जुब भी होगा! #VikramVedhaTrailer out on 8th September 2022. #VikramVedha hitting cinemas worldwide on 30th September 2022,” he wrote.

Vikram Vedha is an action-thriller written & directed by Pushkar-Gayatri. The story is full of twists and turns, as a tough cop Vikram (Saif Ali Khan) sets out to track and chase a dreaded gangster Vedha (Hrithik Roshan). What unfolds is a cat-and-mouse chase, where Vedha – a master storyteller helps Vikram peel back layers through a series of stories leading to thought-provoking moral ambiguities.

Vikram Vedha is presented by Gulshan Kumar, T-Series and Reliance Entertainment in association with Friday Filmworks & Jio Studios and a YNOT Studios Production.

The film is directed by Pushkar & Gayatri and produced by Bhushan Kumar & S. Sashikanth and Reliance Entertainment. Vikram Vedha will hit the big screens globally on 30th September 2022.