Hrithik Roshan and Saif Ali Khan starrer Vikram Vedha is having a great run at the box office ever since its release and is registering constant growth in its collections. While the makers are leaving no chance to bring the experience of the film to the masses, they have now decided to discount the ticket price by 20%-30% for the audience. 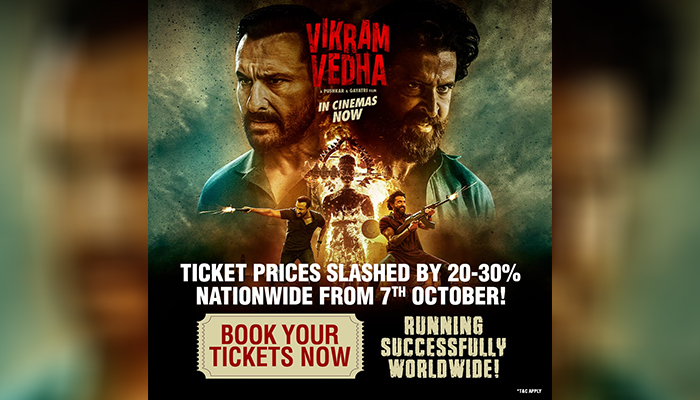 Vikram Vedha is constantly garnering a lot of love from the masses, which is well reflected in its constant rise at the box office. As the film is attracting a whole lot of crowd to the theaters, the makers have decided to welcome more of them by discounting the ticket price in all cinemas across the nation by 20%-30% from 7th October 2022, Friday.

This will certainly make the film available to the mass audience while making it more pocket friendly.

Moreover, Talking about the growth of the film at the box office, the film had registered approx. 200% growth in multiple cities from Jodhpur, Indore, Mumbai, Navi Mumbai, and Bengaluru. It went on to collect 5.77 Cr. net all across the nation on its 5th day, and 7.21 Cr. net on the 5th day.