Jackky Bhagnani’s Jjust Music along with Tiger Shroff today unveiled the motion poster of the patriotic anthem, Vande Mataram ahead of Independence Day. Voiced by Tiger Shroff, this marks the singer-actor’s first-ever song in Hindi after garnering success with two English songs, Casanova and Unbelievable. The song will release on the 10th of August. 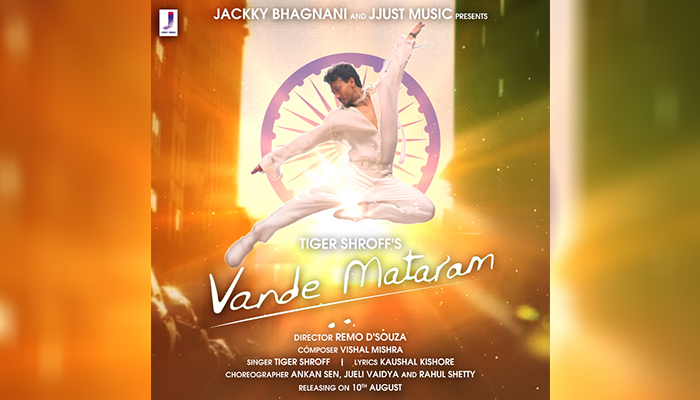 Jackky Bhagnani shares, “#VandeMataram is not just a song but an emotion that celebrates independent India. Extremely grateful to share a special song, a tribute to our India, our home. Couldn’t be happier that my bro @tigerjackieshroff has sung it soo beautifully. So excited to share it with you all. Releasing on 10th August! Stay tuned.”

Tiger Shroff shared, “This is the first time I have attempted to sing a song like this, So excited and nervous at the same time to share with you all my next single #VandeMataram. It’s not just a song but an emotion that celebrates independent India. Extremely grateful to share a special song, a tribute to our India, our home. Releasing on 10th August.”

Jjust Music has given the audiences some splendid melodious treats with songs like Prada featuring Alia Bhatt, Jaaye Be by Ammy Virk, the spirit uplifting song, Muskurayega India and Jugni 2.0 to name a few. The motion poster instantly instills a patriotic feeling and the song is set to do more. Directed by Remo D’Souza, his vision will make the euphonious song extra special.

Before their collaboration as film producer and actor, Jackky Bhagnani and Tiger Shroff collaborate as music producer and singer, respectively, for this beautiful track. This track has to be one of the biggest and boldest singles we will see in a while. With Jackky Bhagnani, Tiger Shroff and Remo D’Souza backing it – it has to be better than the best!