After delivered the blockbuster film Bhaag Milkha Bhaag in 2013, actor Farhan Akhtar and director-producer Rakeysh Omprakash Mehra reunite for sports drama, titled- Toofaan. This time, Farhan has stepped in as a producer as well, along with his partner Ritesh Sidhwani. 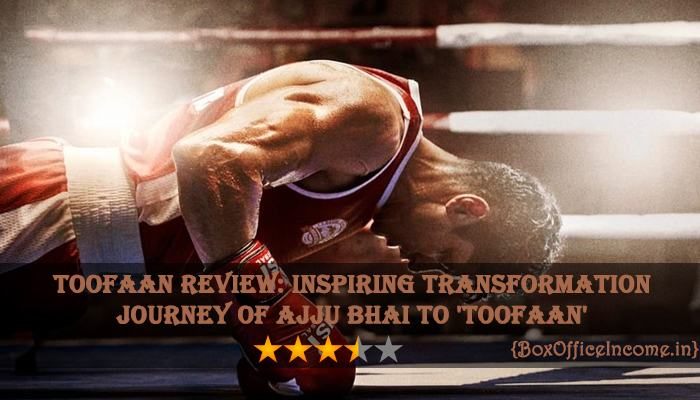 Plot: The story of Aziz Ali aka Ajju bhai (Farhan Akhtar), a street brawler’s transformation into a top-class boxer. Ajju meets Ananya (Mrunal Thakur), who gives him reason enough to become Aziz Ali, the boxer. She asks him to make a choice. Does he see himself as Ajju wasooli bhai or Aziz Ali, a respected boxer? What happens next forms the rest of the film.

Performance: Coming to performances, Farhan Akhtar does full justice to his role and looks convincing as a boxer as well as Dongri’s Bhai. Mrunal Thakur, who has already showcased a great performance in Batla House, continues to win hearts as Dr. Ananya Prabhu too. Paresh Rawal is a treat to watch as the coach Nana Prabhu. Others also do well.

Direction & Music: Director Rakeysh Omprakash Mehra tried hard to live up to everyone’s expectations, which is something that shows in the film. Also, he does a cameo in the film, as IBF Secretary.

The music for the film is composed by Shankar–Ehsaan–Loy, Dub Sharma, Samuel–Akanksha and Daniel Lozinski while the lyrics are written by Javed Akhtar, D’Evil and Manoj Kumar Nath which is disappointing and this is also one of the weak points.

Final Words: Overall, the movie is a great inspiration for the youth to chose a right path which is also giving the society a great message to live as a unity. Everyone should watch this at least once not only for the actors but to take a great lesson.