After the humongous success of Bewafai, last week Bhushan Kumar has come up with a yet another beautiful music video. This time, the new single celebrates dosti-yaari like never before. Titled Teri Yaari, the song is an ode to the bond of everlasting friendship between three guys. 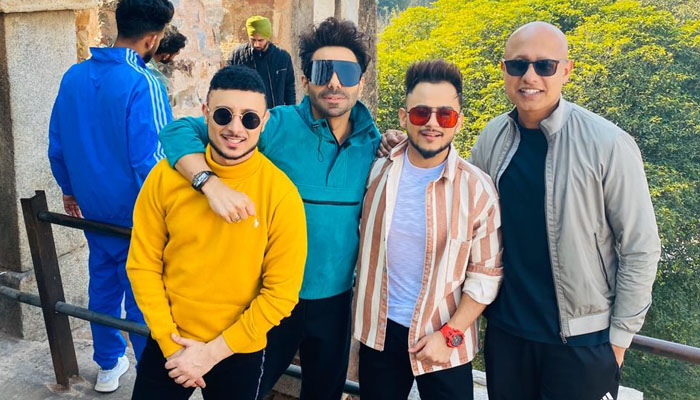 Teri Yaari features Millind Gaba, Aparshakti Khurana and King Kaazi. Aparshakti made his debut as a singer with T-Series’ single Kudiye Ni which went on to become a smash hit on the music charts last year. Much before the lockdown happened, Teri Yaari was conceived by Sunil Sethi and was shot at Hauz Khas Village and on the outskirts of Delhi.

Teri Yaari, a melodious, peppy number with Bhangra beats, will take you on a nostalgic trip, and leave you reminiscing about your fond memories with your gang of friends! Millind, Aparshakti and Kaazi not only play best friends in the video but have also lent their voices to the track. With music by Millind Gaba (#MusicMG) and lyrics by Millind Gaba, King Kaazi, Viruss and Stylish Singh, the song is guaranteed to make you think of your careless fun days with your friends.

Bhushan Kumar, head honcho of T-Series, says, “It’s been proved that music can relieve stress and soothe the mind. During this period of lockdown and self-isolation, we are glad that we can bring one more fun song which you can enjoy from your home. Teri Yaari is a beautiful track that celebrates friendship in a very matter-of-fact way. It’s about the little but priceless joy we experience with our friends while growing up. Teri Yaari is dedicated to all the BFFs out there. It was lovely to have the talented trio of Millind, Kazi and Aparshakti on board for Teri Yaari.”

Millind Gaba tells us, “Kaazi and I, along with another fabulous artist, Viruss, were jamming together when we thought of this concept of making a friendship song on Bhangra beat. That’s how we cracked Teri Yaari in about two hours. This was my first collaboration with Aparshakti paaji. I expected him to be more formal but he’s a humble, grounded person who loves doing masti. He’s a fun person to hang out with. I love my friends and after Yaar Mod Do, this is my second token of love for my friends and everyone who appreciates my work.”

Aparshakti shares, “After Kudiye Ni, I was planning to do my next single with T-Series. Millind and Kaazi were also in touch with the team to do their next. It was by chance that the entire team asked us if we would like to collaborate. We share a certain kind of respect for each other’s work and we all met and decided to do it. Teri Yaari happened and it sounds like a really cool friendship anthem. People who are missing their friends during this period of lockdown will love this track.”

King Kaazi, on the other hand, reveals, “Teri Yaari is not dedicated to a particular age group. It is a song that everyone will connect with — from kids to adults, as well as the older generation. I believe friendship is the best kind of relationship in the world and we value our friends very much. So Teri Yaari is a fun Bhangra song that celebrates dosti and will remind you of your own buddies.”