The entertainment industry started the year 2020 on a strong note. With box-office hits like Tanhaji: The Unsung Warrior, we were looking forward to a productive year ahead. But, in the following months, the entire industry took a hit due to the COVID-19 pandemic. 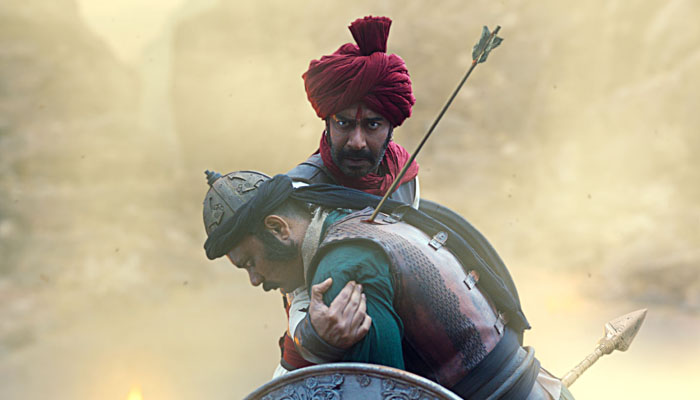 Amongst all the chaos brought last year, Tanhaji: The Unsung Warrior directed by Om Raut and produced by actor-filmmaker Ajay Devgn and T-Series emerged as one of the highest-grossing films of 2020. The movie was celebrated by the audience due to the magnanimity of its cinematic experience. Released in 3D, the movie saw the stellar star cast as Ajay Devgn collaborated with wife Kajol and co-stars Saif Ali Khan and Sharad Kelkar on the big screen after a very long time. Not only did the movie earn more than Rs. 270 crores in the six weeks that it was screened, but it was later re-released in October 2020 when theatres reopened for the audience.

After entertaining the audience for a year in theatres, on television and mobile screens, Tanhaji: The Unsung Warrior has added one more feather to its illustrious cap. According to a survey report by Book My Show, the movie has become the Top Most Rated Film of the year 2020. Another report from Google Trends has stated that Tanhaji is the third most searched film on Google in the past year.

The entire team of the movie has gone above and beyond to entertain the audience with the larger-than-life sets, the gripping storyline, the remarkable special effects and the memorable songs. It has certainly created its mark in the history of Indian cinema, after going through a four-year process.

Talking about this new achievement, director Om Raut, who made his Bollywood debut with the film shares, “I’m overwhelmed! The movie and the crew are very close to my heart. Every second we spent shooting the movie, planning the sequences in advance is cherished by all of us. Ever since we were kids, we were taught about the heroics of Chhatrapati Shivaji Maharaj’s trusted Mavalas. Their will to fight against the injustice by the Mughals and their dedication towards a better life is what has always inspired me to create such iconic stories. Even now when people tweet or comment about having watched Tanhaji and praise our hard work, it fills me with such joy. I consider it a job well done. I hope to entertain the audience with many more stories like Tanhaji Malusare.”

Superstar Ajay Devgn, who not only starred as the lead but also produced the historical action film, shares, “No matter where we are from, the stories of real heroes has always resonated with us. Working on Tanhaji has been a great experience. I aim to bring to our audiences more stories of our heroes that should be celebrated and remind them of the sacrifices they have made for the lives we live today.”

We cannot wait for filmmakers to create such stories as an inspiration for us. Released on January 10th, 2020, Tanhaji: The Unsung Warrior will surely be etched into our hearts forever!