When you talk about the most popular and celebrated singers from this generation, Neha Kakkar’s name comes right on top. Also called the hit making machine in the music arena today, Neha Kakkar has the Midas touch – every song she sings turns out to be a chartbuster. Now, Neha has teamed up with Jaani for their first ever music video together titled Jinke Liye. 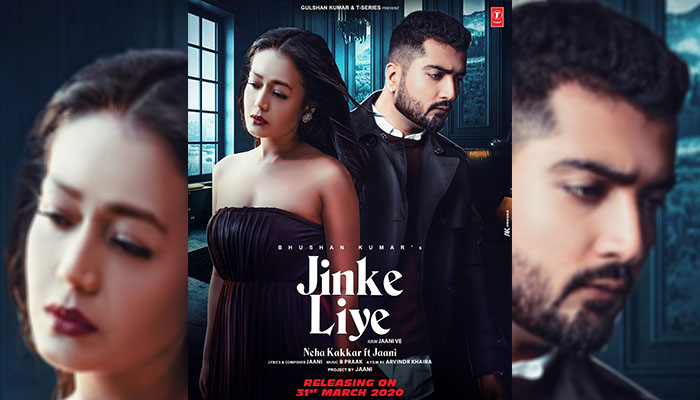 The heartbreak track, produced by Bhushan Kumar’s T-Series, features Neha and Jaani on screen for the very first time.  Jinke Liye is part of Jaani’s album ‘Jaani Ve’ which comprises of seven songs. This is the second song after Pachtaoge which is being released as a single. Pachtaoge was a huge success and featured Nora Fatehi and Vicky Kaushal.

The song, another sad track, sung by Arijit Singh, turned out to be the most heard track of 2019 with over 359 million views. Taking the success of Pachtaoge ahead is Jaani with Jinke Liye and for the same, he’s got Neha to croon the soft, melodious number that will tug at your heartstrings.

Previously, Neha and Jaani have delivered songs like Nikle Currant and Wah Wai Wahh, which Jaani had written. But the biggest USP of Jinke Liye would be that this will also be the first time that music composer and songwriter Jaani will feature in a song that he’s written. While Wah Wai Wahh clocked over 85 million views on YouTube, Nikle Currant has recorded over 642 million views already.

Neha Kakkar shares, “I have worked with Jaani in the past on a few songs and he’s a really gifted artist. His composition and lyrics touch your heart. I’m a big fan of Jaani’s art and when he told me about Jinke Liye, I immediately fell in love with it. In recent times, I have sung a lot of dance numbers and Jinke Liye is a complete shift from that. In fact, it’s a heartbreak song that everyone will be able to relate to. Shooting with Jaani was amazing as this is our first music video together. T-Series has always supported me and they have been like family to me. Together, we have always delivered chartbusters and I’m sure our fans will love Jinke Liye as well. I’m also extremely thankful to Bhushan sir for trusting me and giving me the opportunity to be a part of this amazing project.”

Jaani further added, “The minute I wrote this song I knew I wanted Neha to sing it, she always adds her unique charm to every song and this was no different. This song talks about heartbreak, something we’ve all faced in our lives but it takes a very different approach, and I’m very happy with the final product we’ve delivered. This is my first time on camera and it’s all because of Bhushan sir. Artists are used to being in the background and very few of us get the opportunity to showcase ourselves to the world. The fact that Bhushan sir believed in me enough to do this makes me feel so happy and appreciated. I am truly grateful to him, I don’t know where I would have been without him and his support.”

Bhushan Kumar, head honcho of T-Series, tells us, “Last year, Pachtaoge worked fantastically well for us. Jaani is an extremely talented artist. Together T-Series and Jaani have consistently given innumerable hits in the past and I tremendously admire him as a professional who is able to deliver chartbusters at such a fast pace. His new song Jinke Liye is also in a similar space, talking about heartbreak and the pain that comes along with it. It’s a really melodious track sung by our in-house talent Neha Kakkar who can never go wrong. We have the best from the business – Neha, Jaani and B Praak coming together for this song and I’m sure this will touch everyone’s soul too.”

B Praak has directed the music, Jaani has written and composed it and Arvindr Khaira has directed the video. Jinke Liye will be out soon only on T-Series’ YouTube channel and we can’t wait to watch it!