Manoj Bajpayee, Diljit Dosanjh and Fatima Sana Shaikh are set to unite on screen as their upcoming film Suraj Pe Mangal Bhari is among the big Diwali releases this year. The first poster of the film is out and displays the confirmed release date, November 13. 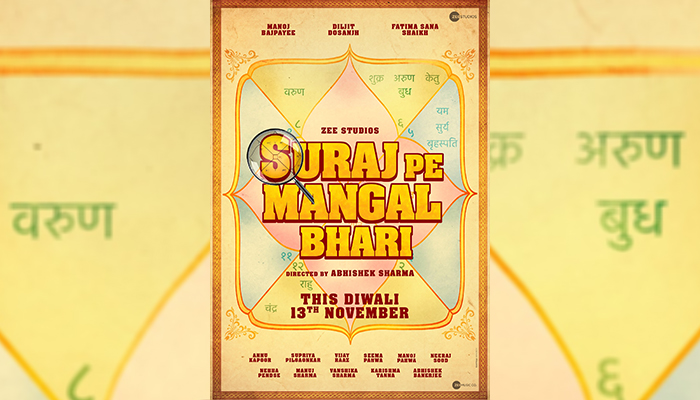 The poster bears the name of the film written on the layout of a traditional Indian horoscope. A microscope is also seen in the picture to point out the film’s connection with the fascination of the Indians with astrology. Directed by Abhishek Sharma, Suraj Pe Mangal Bhari promises some genuine laughs.

It is interesting to note here that the Akshay Kumar starrer Sooryavanshi, which was earlier set for a Diwali release once the theatres reopen, has been pushed citing uncertainly of the market. If Suraj Pe Mangal Bhari decides to go for a theatre release, it certainly gets a solo run at the box office.

The film is among the many to finally have a theatrical release after the Central government green-lit the reopening of cinemas and multiplexes from 15 October under its Unlock 5.0 plan. Cinema halls will function at 50 percent capacity and one-seat distance between the viewers.