Ever since the first look of Kartik Aaryan’s highly anticipated action drama ‘Shehzada’ has come out, it has ignited the excitement of the audience to witness the young superstar in a never seen before action avatar. While the audience is eagerly waiting to see more from their favorite superstar, the actor has finally here with the poster of Shehzada featuring him in a Gamcha shot. 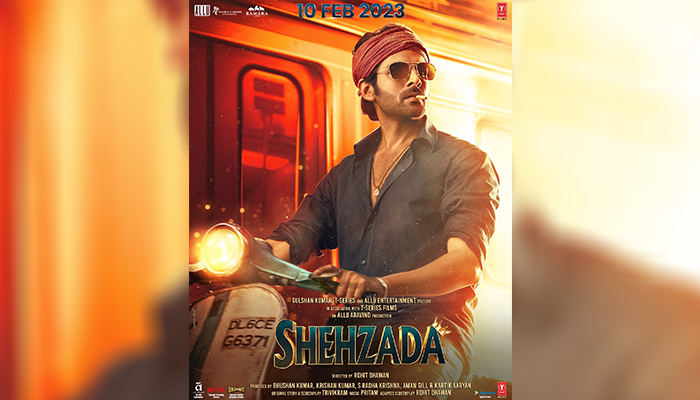 While taking to his social media, Kartik shared the poster of Shehzada in which he is looking super cool and full of swag in his blue shirt and tying a Gamcha on his head, and riding a Vespa with a cigarette in his mouth. He jotted down the caption writing – “#Shehzada Aa Raha Hai 👑 Trailer out Tomorrow 🔥”

The man who has a super successful 2022 looks like he is going to own the box office in 2023 also with his first-ever outing in a full-on action and family masala entertainer.

While Shehzada is one of the most awaited films of the year, it also marks Kartik’s debut as a producer, so we can say that the film is well-studded with many things for his fans to look forward to.

On the work front, Besides Shehzada, Kartik has Satyaprem Ki Katha lined up for this year and will also be seen in the 3rd installment of Aashiqui. He also has Kabir Khan’s untitled in his kitty.