Sandeepa Dhar will be seen slipping into a Maharashtrian character for the first time in her upcoming show, MumBhai, and the beautiful actor has left no stone turned to ace the look. 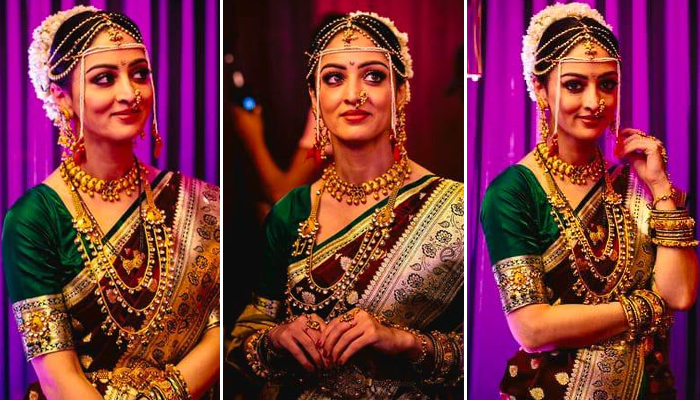 As the trailer of MumBhai released recently, we got an insight into the look of Sandeepa’s character Vaishnavi as she dons the Marathi avatar. From sporting the typical Mangalsutra to adapting to the mannerisms, Sandeepa is seen perfectly absorbing the essense of her character.

Soaking into the depths of her character, Sandeepa Dhar resembled the perfect marathi bride with the typical marathi headgear known as the bashing, along with the nose pin which is called a nath. With a chandrakor bindi and statement jewellery, Sandeepa Dhar was also seen wearing the traditional wedding saree, known as shaalu, catering to the minute details of her character.

The actress who hails from North India has been living in Mumbai and is familiar with the Maharashtrian culture. However, for her character, she not only had to be fluent in her diction and adapt to the mannerisms, but also study the way of living in the 90s and 2000s. Therefore, in order to ace her part, Sandeepa learnt Marathi and studied the lifestyle of Mumbaikars in that era.

Sandeepa Dhar has been treating her fans and followers with sneak peeks into her preparation as well as shoot, keeping the audience intrigued to know more.