Vidyut Jammwal, who were never fails to impress the audience with his action, is back with his new film, titled Sanak, directed by Kanishk Varma. The film promises a lot of action and entertainment. 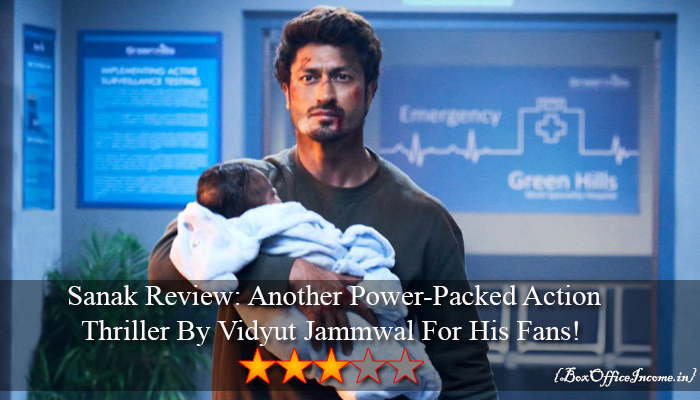 Plot:- Sanak is a hostage drama set against the backdrop of a hospital in Mumbai. Vivaan Ahuja, an MMA Trainer (Vidyut Jammwal) is treating his ailing wife Anshika (Rukmini Maitra) at a hospital who’s recovering from a life-threatening surgery. The hospital she’s admitted to becomes the centre stage for drama when a bunch of terrorists, lead by Saju Solanki (Chandan Roy Sanyal), plan to rescue a fellow criminal Ajay Pal Singh (Kiran Karmarkar) from the hospital premises. Police officer Jayati Bhargav (Neha Dhupia) leads the charge in trying to nab the bad guys and diffuse the tense situation. Does he manage to rescue her and other hostages from the dangerous hoodlums? What happens next forms the rest of the film.

Performance:- Vidyut Jammwal does a great job and has justified his role. He successfully keeps you engaged throughout with his performance and action. Besides him, there’s Rukmini Maitra (Bengali Actor) who plays Vidyut Jamwal’s wife, does a decent job. On the other hand Chandan Roy Sanyal, who was seen in films Jazbaa and Jabriya Jodi, does an average job. Neha Dhupia and the other support casts are fine.

Direction & Music:- Director Kanishk Varma, direction is average. On the other hand, action sequences with BGM is good.

Overall:- Sanak is a decent action entertainer that works because of the action sequences and some paisa-vasool scenes. At the end, If you are a action lover and Vidyut’s fan, then definitely this film will impress you.