With over 2000+ entries, ShortsTV successfully hosted the third edition of the Best of India Short Film Festival, a platform that has been bridging the gap between Indian filmmakers and Hollywood. After much deliberation, the jury was won over by RSVP’s short film Natkhat featuring Vidya Balan and declared it as the winning film of this edition. Co-produced by Vidya Balan & Ronnie Screwvala and written by Shaan Vyas & Annukampa Harsh, the winner will be eligible for Oscar® nomination along with a grand prize of $2,500 and an opportunity for a television broadcast deal on ShortsTV. This year, the festival was broadcasted on ShortsTV channel where the top 10 short films were exclusively aired, and the winner of the festival was announced. 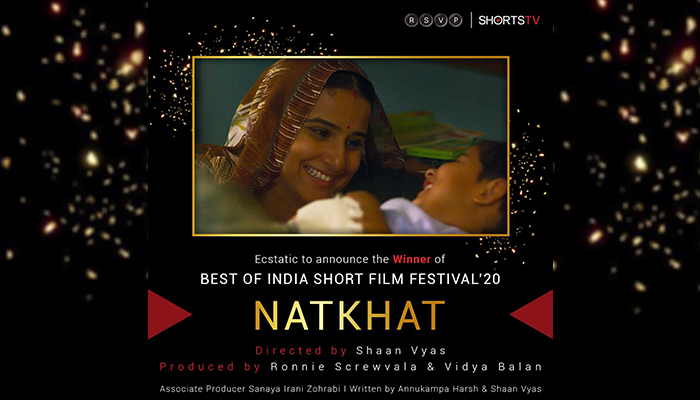 Accepting the award, actress Vidya Balan said, “In a year that has been turbulent, it feels great to win the first award for our film that leads the way directly to Oscar®️ qualification. This film is incredibly close to me since it gave me a chance to play the dual roles of actor and producer. With the audience now opening up for short films, I am glad to see a global platform like ShortsTV, who is striving to make our content available in Indian as well as International households.”

Further, the co-producer, Ronnie Screwvala added, “Even in these times, creativity and content have found ways to thrive and travel. Through innovation and technology international festivals and platforms have continued to advance and bridge the gaps in new and disruptive ways. Our film, Natkhat has travelled the world this year, addressing important issues and providing a powerful message. ShortsTV Best of India Film Festival has been one such credible festival and platform – we are thrilled to have won the festival and are eligible for Oscar 2021 qualification. Onward, together Vidya and I hope to bring home an Oscar!”

Commenting on the initiative, Mr. Carter Pilcher, Chief Executive of ShortsTV, said, “The ShortsTV Best of India Short Film Festival has established itself as a leading industry festival spotlighting the amazing advances being seen now in short film entertainment and setting Indian talent firmly on the road that we hope will bring home an Oscar®. Short movies are exploding in popularity around the world, and we are greatly pleased to see so much Indian filmmaking talent riding the wave with us – more than 2000 entries is simply astounding. Congratulations to each of the finalists – this year’s entries demonstrated an amazing depth of Indian filmmaking talent. We couldn’t be more excited to be launching them on the road to international fame and recognition. Not only will our winners here in India have their film screened in Hollywood movie theatres, qualifying them for Oscar consideration, they will also receive global broadcast on ShortsTV.”

Natkhat, a 33-minute short, underlines the fact that home is where we learn the values which shape us and make us who we are. A story framed within a story where a mother notices her little school-going son Sonu (Sanika Patel) gravitating towards misogyny and disregard for the other gender just like the men in her family. Vidya Balan, who turned producer with this film, is seen playing the role of a homemaker in a patriarchal setup. The film touches upon the sweet mother-son relationship, which quivers with each blow, and settles with a soothing touch.

The other finalists of this edition will also be eligible for Oscar® consideration and a television broadcast deal on ShortsTV. The other 4 finalist films were

The winner of last two editions was filmmaker Karan Rawal’s short film ‘Half Full’ featuring veteran Naseeruddin Shah and Vikrant Massey and filmmaker Chintan Sarda’s short film ‘Shunyata’, featuring Jackie Shroff in a leading role. You can watch these films on Tata Sky ShortsTV, Airtel ShortsTV and ShortsTV Active on DishTV & D2H. For more updates keep up with ShortsTV social channels by following us on Instagram and Facebook.

ABOUT SHORTSTV: ShortsTV is the first and only 24/7, linear and OTT HD TV channel dedicated to short form video entertainment, including movies and series. With over 13,000 titles, ShortsTV has the largest catalog of quality short form video entertainment, including award-winning and star-studded live action, animated and documentary shorts from filmmakers around the globe. Distributed globally, the channel is available in 100 million homes across the US, India, Latin America, the Netherlands, Belgium and Eastern Europe. It is available across the India on Tata Sky as Tata Sky ShortsTV (channel no 113), Dish TV as ShortsTV Active (channel 135) and on Airtel Digital TV as ‘Airtel ShortsTV’ (channel 259). In addition to the channel, ShortsTV distributes a significant catalogue of on-demand shorts through video-on-demand on iTunes in 92 countries, Amazon Instant Video (UK, US and Germany), Google Play (US and Canada), and Verizon and Frontier (US). Since 2006, ShortsTV has exclusively presented the ‘Oscar Nominated Short Films’ theatrical release in cinemas across the US and Canada, South America, Europe, India, Australia and South Africa.