One of the major contemporary Indian filmmakers Rajkumar Hirani, yesterday submitted the original negatives of PK to be added to the National Film Archives of India collection. 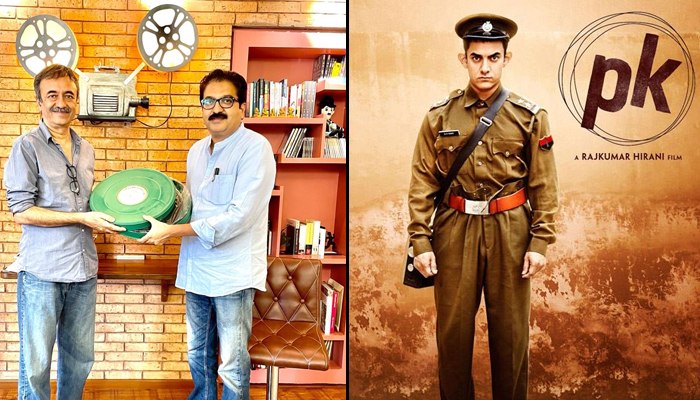 “It is the duty of a filmmaker to ensure that the original negatives of his or her films are preserved for posterity and for the entertainment and study of future generations of cineastes and scholars. I appeal to all filmmakers to support the NFAI in this important endeavour,” said Mr. Hirani, an alumnus of Pune’s Film and Television Institute of India (FTII).

Starring Aamir Khan, the film was a popular satire that was received well by audiences and critics alike. Hirani in addition also handed over nearly 300 cans consisting of initial rushes of the film and also outtakes of his other hugely popular 2009 film, 3 Idiots to Director, NFAI Prakash Magdum.

“The significance of the acquisition of the negative of PK (2014) is that it is one of the last films to be shot on celluloid. Mr. Hirani also generously gave us a large number of posters, lobby cards, and still photographs from films that constitute his body of work,” said Mr. Magdum.

“The film is a wonderful, unique comment on superstition and other foibles of contemporary Indian society and hence we were looking forward to acquiring the negative despite the film being a fairly recent one. Mr. Hirani, who is known for his light-hearted yet trenchant takes of social issues, had co-produced it along with Vidhu Vinod Chopra. Moreover, as the transition from celluloid to digital in terms of production of films in India happened during 2013-14, it was all the more important to have this film for preservation,” Mr. Magdum said.

Earlier films of Hirani, like Munnabhai MBBS (2003) Lage Raho Munnabhai (2006), and 3 Idiots (2009) are already a part of the preserved negatives at NFAI. Directed by Mr. Hirani, PK, which featured Aamir Khan in the quirky titular role of a humanoid alien, smashed all the box office records.