Sonakshi Sinha’s upcoming thriller, ‘Nikita Roy and The Book of Darkness’ has been making the right noise ever since the film was announced. And joining the star on this journey is none other than the handsome Arjun Rampal. The film went on floors in London and will be shot in the Brit capital and other parts of the UK. 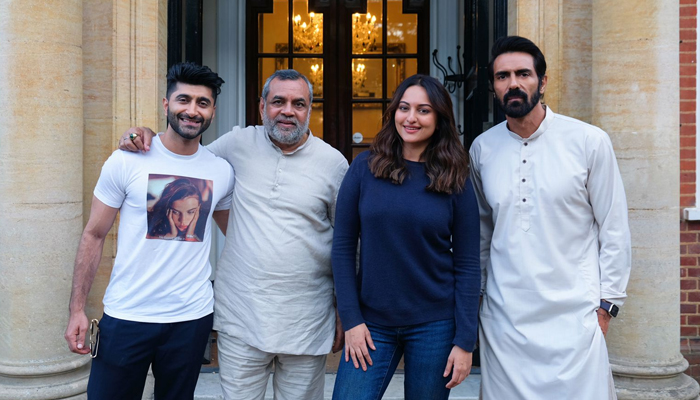 Talking about joining the cast, Arjun says, “It was a real pleasure to do a cameo in this film, as it reunited me with Paresh Rawal, who I adore, Nikki Vikki who I have seen as kids and now as producers. Also I am very fond of the Sinha family and so delighted to see Kush at work doing so well and Sonakshi in a totally different avatar. Nikita will be a film to look out for and I wish the whole team my best wishes for it, as I had a blast working with them.”

Sonakshi adds, “It is such a lovely opportunity to work with Arjun in the film. He has this easy charm about him and doesn’t make the scene feel heavy, no matter how intense it is. As creative people, we vibe on similar things and there is always so much to talk about with him. It has been really enjoyable waking up everyday and going on this set.”

The most excited of the lot is Nicky Bhagnani, for whom working with Arjun is a childhood dream realised. He tells us, “When Arjun Sir was shooting for Deewanapan in 2001, both Vicky and I were constantly lurking on the film’s set because it was our family production. We were teenagers who were very inspired by him. We wanted to be cool like him. He hasn’t changed despite seeing success and fame. When we went on the set recently, he met us with the same warmth. He remembered from the time I used to sit around on his set. It is such a joy to work with him so many years later and it feels like life has come a full circle.”