Superstar Shahid Kapoor starrer Jersey already has fans counting down to the New Year for the launch of the much-awaited film. Slated to release in theatres on 31st December, Jersey will see Shahid’s return to the big screen after the resounding success of Kabir Singh. Stepping into the month of the film’s release, the makers of the film have also joined the countdown to Jersey by releasing a new poster. 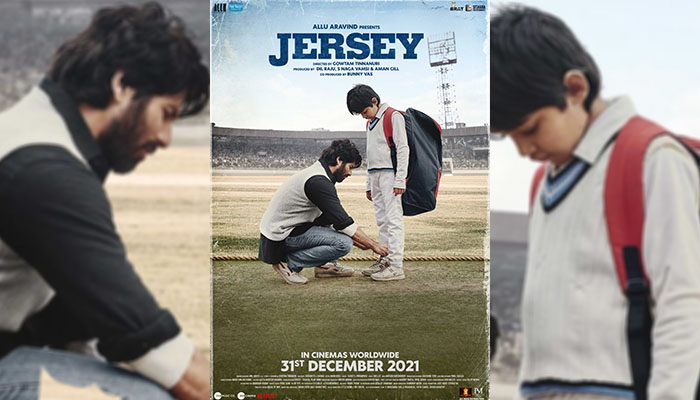 Bringing out the awww factor, the new poster of Jersey emphasises the father-son relationship that will be brought to life in the film. Stealing your hearts, the poster sees Arjun, Shahid Kapoor’s character, tying his son Kittu’s (played by Ronit Kamra) shoelaces. Symbolic of the bond between Arjun and Kittu, the poster showcases yet another emotion of the film.

The story of the film revolves around a failed cricketer who struggles to buy his son a jersey. A raw, relatable and real story, Jersey is celebration of the human spirit. Making you believe in the power of dreams, the film is set to keep you on the edge of your seat.

The film will also see Mrunal Thakur opposite Shahid Kapoor for the very first time. Marking the return of seasoned actor Pankaj Kapur to the big screen, he will also be seen turning cricket coach in the film.

Presented by Allu Aravind, the movie has been directed by the National Award winning filmmaker Gowtam Tinnanuri, who directed the original Telugu Jersey and is produced by Aman Gill, Dil Raju and S Naga Vamsi. The foot-tapping, powerful numbers by Sachet-Parampara are also sure to have you humming the Jersey tunes.