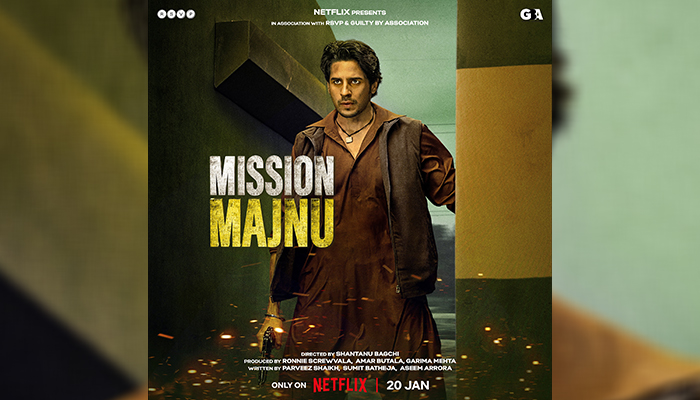 Inspired by true events, Mission Majnu transports you to the past to uncover one of India’s most important missions. The film takes you through the emotions of loyalty, love, sacrifices and betrayal with an action-packed screenplay where one wrong move can make or break the mission. Directed by Shantanu Bagchi and produced by RSVP and GBA, Mission Majnu stars a stunningly talented cast of Sidharth Malhotra, Rashmika Mandanna, Kumud Mishra, Parmeet Sethi, Sharib Hashmi, Mir Sarwar and Zakir Hussain

Speaking about the film, actor Sidharth Malhotra says, “I’m quite excited about Mission Majnu since it will be my first time playing a spy. It shows India’s most thrilling covert mission, which transformed the politics between India and its neighbouring nation in the 1970s. With Netflix on board, I am confident that this incredible narrative will resonate with people all around the world.”

Producer Ronnie Screwvala spoke about the film and his collaboration with Netflix. He said, “Mission Majnu is the story of India’s growing prowess and place in the global standing of nations as a superpower, both as the fastest growing nation in the world and the biggest democracy – and stories like these show how we laid the cornerstone for our standing. It’s a story best suited for the audiences on Netflix with its global reach. Sidharth Malhotra and Rashmika Mandana make this story come to life and RSVP is really proud to present this”

Producers Amar Butala and Garima Mehta add, “Our journey with Mission Majnu has been an exhilarating one. This is a compelling story of the men who serve our nation across borders. Even though they don’t wear the coveted uniform, their fortitude and sacrifice make for a powerful story. Our endeavour is to create stories that stay with the audiences for a long time. We are happy to be working with Netflix which allows audiences globally to find diverse stories from India and we are hoping that our film is loved across the globe.”

Talking about the collaboration, Monika Shergill, Vice President-Content, Netflix said, “Mission Majnu is a story of valour and courage based on one of India’s most important missions. We are very excited to present this espionage action thriller with the remarkable Sidharth Malhotra in a powerful performance as a RAW agent and the very talented Rashmika Mandanna, making their streaming debut on Netflix. Mission Majnu packs in grit, heart, drama and mesmerizing music that will make for a viewing treat for our members in India and across the world.”

Meanwhile, Sidharth Malhotra will next star in Dharma Productions’ Yodha with Disha Patani and Raashi Khanna. Rashmika Mandanna, on the other hand, will resume Pushpa 2: The Rule shoot. She will also star in Thalapathy Vijay’s next and Sandeep Reddy Vanga’s Animal with Ranbir Kapoor.