After a tremendous opening weekend, the Hindi period drama Manikarnika: The Queen of Jhansi has remained strong on Monday as well despite a normal weekday and having other major releases in its parallel. Due to positive word of mouth, the movie showed a strong uptrend over the weekend. 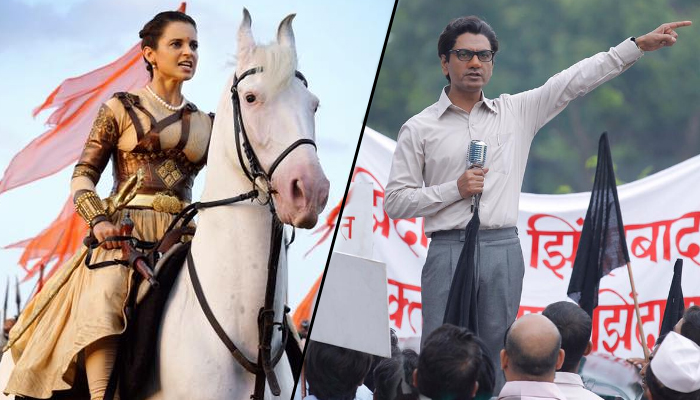 Being the much-anticipated release, Kangana Ranaut in lead roles, Manikarnika: The Queen of Jhansi has got succeed to hit the target right as expected and received mostly positive reviews from the critics as well as the audience across the country.

Presented by Kairos Kontent Studios’ Manikarnika opened on a decent note and registered the business of 8.75 crores from 3000 screens across India. Over Saturday and Sunday, it picked up remarkably and did the business of 18.10 crores and 15.70 crores respectively at the domestic box office.

After the weekend, the total collection of the film had recorded 42.55 crores. Now it has stepped-in on weekdays and minted the amount of 5.10 crores on Monday with a drop of approx. 41.71% than Friday. With this, the total 4 days collection of Manikarnika has become 47.65 crores.

On the other hand, Thackeray has also got succeed to impress the critics as well as the audience and passed the weekend on a solid note. Being Nawazuddin Siddiqui starrer, it took a good start and did the business of 22.90 crores over the weekend, that included 6 crore of Friday, 10 crore of Saturday and 6.90 crores of Sunday.

Then on Monday, as usual, this biographical drama has faced a considerable drop due to normal working day, but still managed to remain strong. Thackeray raked the business of 2.90 crore on the fourth day and raised its 4 days total collection to 25.80 crores.