One of the most entertaining performers of Indian Entertainment industry, Maniesh Paul took to social media to flaunt his new look with blue streaks, generating speculations about a new project. 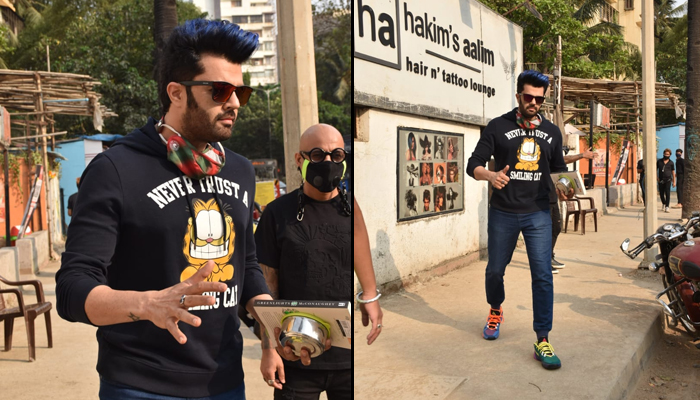 Known to have impressed the audience with his stage presence, singing skills to his acting prowess, Maniesh Paul is touted as the entertainment extraordinaire. Also known for his awestrucking looks, fashion choices and his love for classic shoes, Maniesh is always seen acing the fashion game, experimenting with his looks.

Continuing his streak of experimentation, Maniesh underwent a quirky transformation sporting a funky blue hair colour. Taking to Instagram Maniesh posted a video of himself with hairstylist Aalim Hakim, thanking him for the experimental look saying, ” I’m not the one who would experiment with my hair much…but this man, holding the scissors, makes magic happen…thanks @aalimhakim my brother🤗🤗🤗”

Seemingly happy with his electric blue highlights, Maniesh received positive reviews from fans. The look also instigated a chain of speculations around Maniesh Paul being roped in a new project and hence the look. Earlier, Maniesh bulked up for his much awaited upcoming project ‘Jug Jug Jeeyo’, in order to slip into his character as the Punjabi Munda.

Touted as a sincere and hardworking actor, it’s known of Maniesh to push his boundaries to get the desired specifications to fit right into his character. Roped in for Dharma Productions’s upcoming comedy drama Jug Jugg Jeeyo, Maniesh Paul be will be seen sharing screen with Varun Dhawan, Kiara Advani, Neetu Kapoor, Anil Kapoor among others.