After offering glimpses into the grand celebration of cinema, one of the most awaited and celebrated events of Bollywood, Filmfare Awards is all set for its telecast on Sunday. Hosted by the ‘Sultan of the stage’ Maniesh Paul, the promos have piqued the interests of the audience to witness the starry affair. 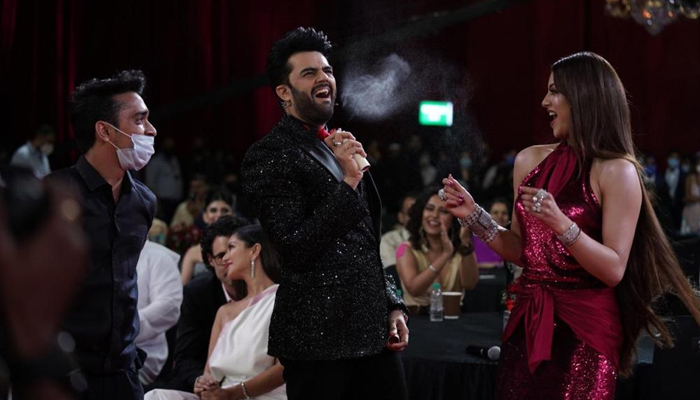 Given the pandemic, while the fanfare was adhered to safety protocols, the experience wasn’t compromised as the host Maniesh Paul ensured to add zing and life to the star-studded event with his eclectic and spontaneous stage skills. Touted amongst the best hosts, any award show is incomplete without the quick and witty humour of Maniesh Paul.

Giving us glimpse of the fun encounters with his co-hosts Ritesh Deshmukh and Rajkumar Rao, and stars present at the awards through his social media, Maniesh has set the excitement building amongst the audience. Serving us with the moments of fun, laugh and enjoyment, clips of Maniesh with actors like Nora Fatehi, Sara Ali Khan, Sunny Leone amongst other, has been breaking the internet off and again.

Scheduled to be telecasted on the 11th of April, it will be an absolute pleasure to watch Maniesh own his territory, after such long time and drive away the blues of the pandemic. Having a precisely busy year we will also see Maniesh sharing screen with Varun Dhawan, Kiara Advani, Anil Kapoor, Neetu Kapoor in Dharma Productions’s much awaited next Jug Jugg Jeeyo, slated to release this year.