The first look of Malaal, the Bollywood debut of Sanjay Leela Bhansali’s niece Sharmin Segal and Jaaved Jaaferi’s son Meezaan was released on 18 May 2019. Helmed by Mangesh Hadawale, the film is produced by Sanjay, Bhushan Kumar, Mahaveer Jain and Krishan Kumar. 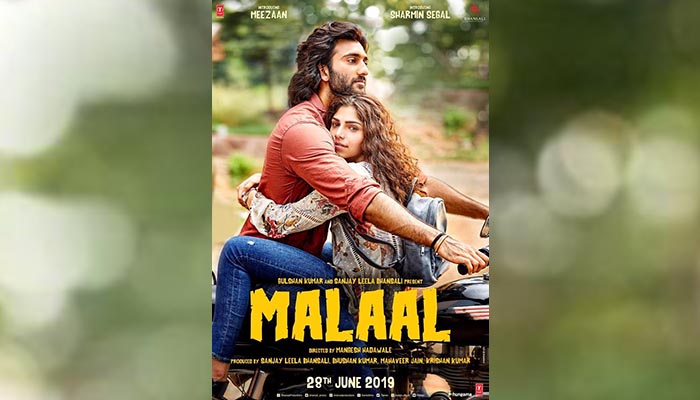 SLB official Instagram handle also shared the poster. They captioned it, “The two new faces of love, join their journey with #MalaalTrailer, out at 1:30 pm! #SLB @tseries.official @sharminsegal @meezaanj”.. Malaal is scheduled to hit cinemas on 28 June.

This poster featuring Sharmin and Meezaan on a bike ride is all about PDA. Sharmin Segal seated on the bike’s fuel tank, letting curly hair all loose, dressed in a casual attire, has hugged Meezaan tight as they are on a bike ride. Meezaan’s focus is on the way ahead but the slight smile on his face cannot be missed.

Mangesh made his directorial debut in 2008 with Marathi film Tingya, which received immense commercial and critical acclaim. Dekh Indian Circus, his second film was in Hindi and has received many national and international awards.

Sanjay has previously launched star kids Sonam Kapoor and Ranbir Kapoor in his 2007 film, Saawariya. Besides Malaal, the filmmaker is also working on Inshallah, starring Salman Khan and Alia Bhatt. Inshallah brings the actor-director duo together after a gap of almost two decades, after they delivered the blockbuster Hum Dil De Chuke Sanam is 1999.