After the sucess of comedy film Sonu Ke Titu Ki Sweety, young superstar Kartik Aaryan is back with his next Hindi film, titled Luka Chuppi. Luka Chuppi is a romantic comedy, which has been directed by Laxman Utekar and it has been produced by Dinesh Vijan’s Maddock Films. The film went on floors in August last year and it has extensively been shot in Mathura and Gwalior. 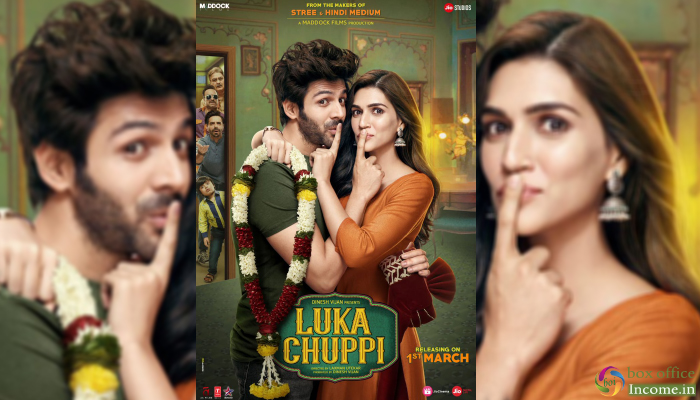 On Wednesday, January 23, makers revealed the first poster of Luka Chuppi that features Kartik Aaryan and Kriti Sanon, who can be seen putting a finger on each other’s lips, while Pankaj Tripathi, Aparshakti Khurrana and Vinay Pathak can be see peeping from a door.

Kartik Aaryan plays a TV reporter in the film while details about Kriti Sanon’s character have been kept under wraps. Apart from ‘Luka Chuppi’, Kartik Aaryan will also be seen in the Hindi remake of Kannada blockbuster ‘Kirik Party’.

Kriti Sanon has four other films in her kitty, including ‘Arjun Patiala’, ‘Kalank’, ‘Housefull 4’ and ‘Panipat’.