The gorgeous Taapsee Pannu, who had recently wrapped up the shoot of her upcoming sports flick Rashmi Rocket, has shared the first look from her upcoming film Looop Lapeta. The forthcoming thriller drama Looop Lapeta is helmed by Aaksha Bhatia and features Tahir Raj Bhasin in a prominent role. 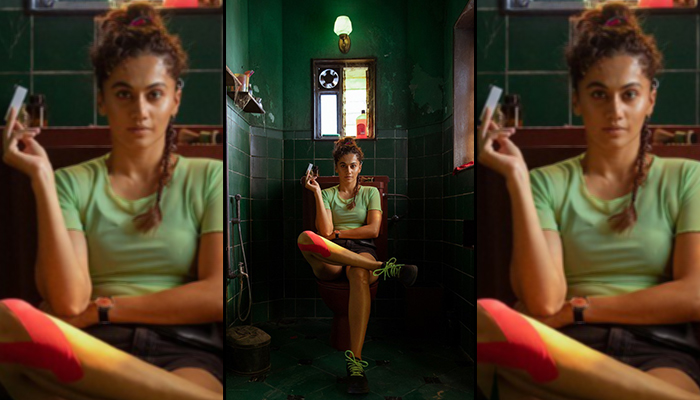 It is a Hindi remake of the German 1998 film Run Lola Run. Taapsee Pannu had shared pictures from Goa where she was shooting for the film. And today she shared her upcoming character picture from the film with fans.

Taking it to Instagram, Taapsee wrote, “Life mein kabhi kabhaar aisa time aata hai jab humein khud se yeh sawaal karna padta hai “How did I end up here?” main bhi yahi soch rahi thi. No, not the shit pot, but the shit life! Hi, this is Savi, and welcome on board a crazy ride #LooopLapeta.” From the picture, it looks like the film will be thriller. Taapsee is seen wearing a green T-shirt and shorts and sitting on a commode.

As reported the 1998 German original starred Franka Potente and Moritz Bleibtreu in the lead role. The story follows a woman who needs to arrange 100,000 Deutsche Mark in 20 minutes to save her boyfriend.

Apart from Looop Lapeta, the Badla actress will also feature in Shabaash Mithu, a biopic on cricketer Mithali Raj and murder-mystery Haseen Dillruba in her kitty. She has already begun training for the film. Taapsee shared pictures from the training set.