Akshay Kumar, Huma Qureshi, Lara Dutta and Vaani Kapoor star together in Bell Bottom. The official Hindi remake of the Kannada film is currently being shot for in Scotland. The actor left with the entire cast of the film a few days back and finally after quarantining, they cast and crew began filming today. 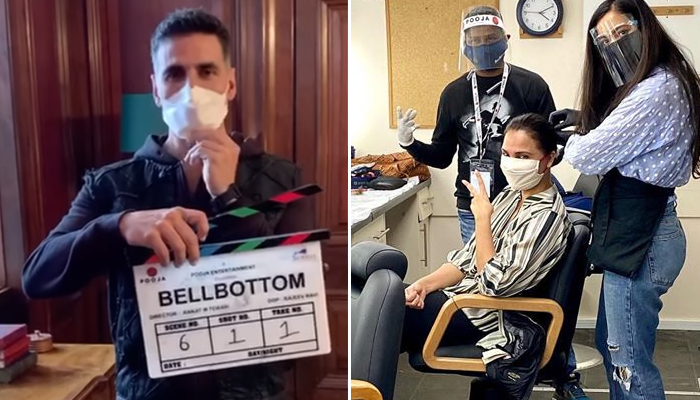 Akshay took to Twitter to post a video from the sets of the film and captioned it as, “Lights, Camera, Mask On and Action. Following all the new norms and filming on for #BellBottom! It’s a difficult time but work has to go on. Need your love and luck.” Akshay is seen with a clap board in his hand as he gave a clap with his mask on.

Not only Akshay, even his co-star Lara Dutta shared an image from her vanity van, where she and her whole crew could be seen wearing a mask. Lara was getting her hair done while posing. “And it begins!! I’m claiming one for the girls! As a 42 year old female actor, in this Covid period, it feels AMAZING to be the first to be back on set of a Bollywood film! Thank you @poojafilms for creating a safe environment for us, she wrote.

producers Jackky Bhagnani and Deepshika Deshmukh had also joined the crew in UK. The movie was the first to go on floors for international schedule after COVID-19 lockdown. Post Akshay, Aamir Khan had followed suit and started shooting for ‘Laal Singh Chaddha’ in Turkey.

Directed by Ranjit M Tewari, the movie is slated for release on April 2, 2021. The first poster of the movie was released by Akshay Kumar in November, last year.