While the team of Shershaah awaits the release of the film schedule to start streaming from tomorrow, early reviews for the film have started pouring in applauding the remarkable performances of the cast. Flooding social media with praises, industry friends and critics have showered their love on Sidharth Malhotra and Kiara Advani. Receiving a special compliment from her upcoming co-star Vicky Kaushal, Kiara Advani’s tear jerking performance has found its way into audience’s hearts. 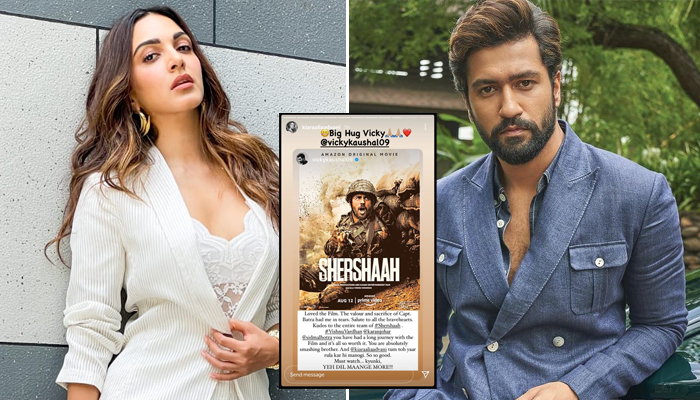 Vicky Kaushal took to social media to say, “Loved the Film. The valour and sacrifice of Capt. Batra had me in tears. Salute to all the bravehearts. Kudos to the entire team of #Shershaah. #VishnuVardhan @karanjohar @sidmalhotra you have had a long journey with the film and it’s all so worth it. You are absolutely smashing brother. And @kiaraaliaadvani tum toh yaar rula kar hi manogi. So so good. Must watch… kyunki, YEH DIL MAANGE MORE!!!”

Recently, Kiara Advani revealed that her last scene in the film got the entire crew and unit teary eyed owing to the emotional quotient of the funeral sequence. Now as the audience witnesses her performance, the same reaction is resonated, with Vicky Kaushal’s comment on the film.

Incidentally, Vicky Kaushal and Kiara Advani have set off to Pondicherry for the shoot of their upcoming film directed by Shashank Khaitan. Juggling a busy schedule packed with back to back commitments, Kiara Advani just returned from Delhi post Shershaah promotions on Tuesday and immediately landed on the sets of her upcoming film ‘Bhool Bhulaiyaa 2’. Beginning Wednesday with a brand event alongside Amair Khan, the actress has now left for the shoot of Shashank Khaitan’s next.

The actress also enjoys an interesting line up of films apart from Bhool Bhulaiyaa 2 and Shashank Khaitan’s next with Jug Jugg Jeeyo, Shankar’s next co-starring Ram Charan. With a few more unannounced projects in her kitty, Kiara Advani is undoubtedly one of the busiest and most bankable stars of Bollywood currently.