Offering a blurry insight into his Thursday morning, the heartthrob of the nation took to social media to share a short video flaunting his messy but yet s*xy hairdo and the envious jawline on his smouldering face that has been gauging comments from his fans and followers. Adding a twist to the normal week-day, presenting a short video with a melodious background music, Kartik Aaryan ruffles his hair against the air giving rise to fan comments praising his hair. 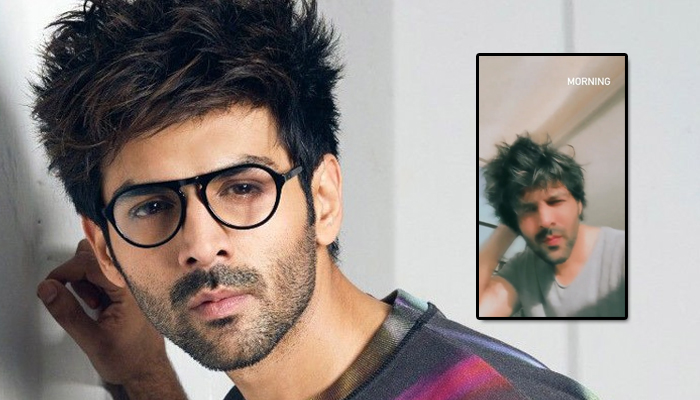 Being the face of multiple brands, Kartik Aaryan is one of the most sought after names in the market currently. With his recent post, netizens are now wishing that the actor should soon endorse some hair-care brand as he’s the perfect face and has the s*xiest hair in B-town. Well, how can one forget the trending hashtag #HairLikeKartikAaryan, where his signature hairstyle is copied by his fans and creates a rage.

Known to create an uproar with his posts, the social media king, Kartik Aaryan has begun several other trends too apart from #HairLikeKartikAaryan. The actor’s poses too create quite a frenzy as hashtag #PoseLikeKartikAaryan is super popular on social media. With witty, engaging and entertaining captions, Kartik Aaryan breaks the internet with social media banters everytime he posts. Amassing a huge fanbase across demographics, Kartik Aaryan is touted as the heartthrob of the nation, emerging as one of the most popular and bankable stars of the industry today.

Proving his versatility with a plethora of films across the spectrum of genres, Kartik Aaryan boasts of an interesting line up of upcoming projects. Generating anticipation for his first thriller ‘Dhamaka’, Kartik Aaryan as Arjun Pathak piqued the interests of the audience for the upcoming film by award winning director Ram Madhvani. Slipping into the horror comedy genre with Bhool Bhulaiyaa 2, Kartik Aaryan would lead the franchise ahead.

He recently announced his new big project ‘Satyanarayan ki Katha’ – a grand musical love story. Talks are rife about him being a part of Ala Vaikunthapuramuloo remake and Hansal Mehta’s next. What a illustrious and power-packed line-up. Along with many unannounced projects and long list of brands to his credit, Kartik Aaryan is unmissable and undoubtedly one of the most loved celebrities in India today.