Over a week back, Producer Sajid Nadiadwala in collaboration with Namah Pictures announced their upcoming film, a soulful musical love Saga, titled ‘Satyanarayan Ki Katha’ with Kartik Aaryan in the lead. 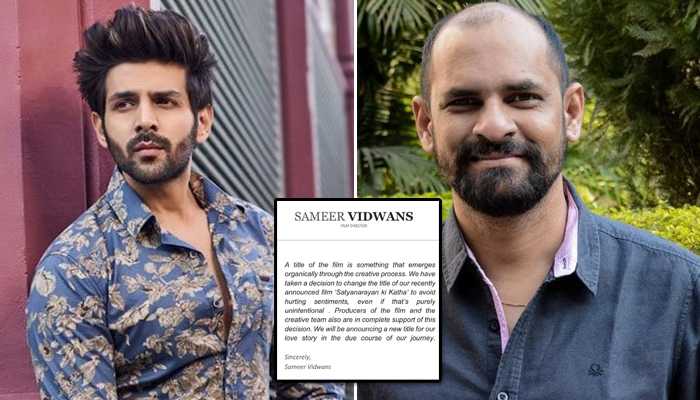 The film which is an epic love story will be going on floors towards the end of the year. However, the title of the film seems to have not gone down well with a few. On July 3, director Sameer Vidwans in a Twitter post said that they have decided to change the title of the film to avoid hurting any sentiments.

Sameer took to his Twitter handle and wrote, “A title of the film is something that emerges organically through the creative process. We have taken a decision to change the title of ur recently announced film ‘Satyanarayan ki Katha’ to avoid hurting sentiments even if that’s purely unintentional. Producers of the film and the creative team also are in complete support of this decision. We will be announcing a new title for our love story in the due course of our journey.”

Talking about the film, director Sameer has said in an interview, “The film is again a unique moving love story. It will bring out a facet of Kartik Aaryan’s talent which audiences haven’t seen so far. Kartik is an immensely talented actor. I wanted only him for this role.”

Co-produced by Namah Pictures and Sajid’s banner Nadiadwala Grandson Entertainment, the film will mark the first collaboration between Kartik Aaryan and Sajid Nadiadwala while it will be directed by National award-winning director Sameer Vidwans.