Kartik Aaryan has been striving to bring positivity in these difficult times and also to enlighten the masses about COVID -19 ever since the pandemic hit our country. His great move to start a chat show Koki Poochega has been applauded by everyone several times, but with his latest episode the actor has hit it out of the park. 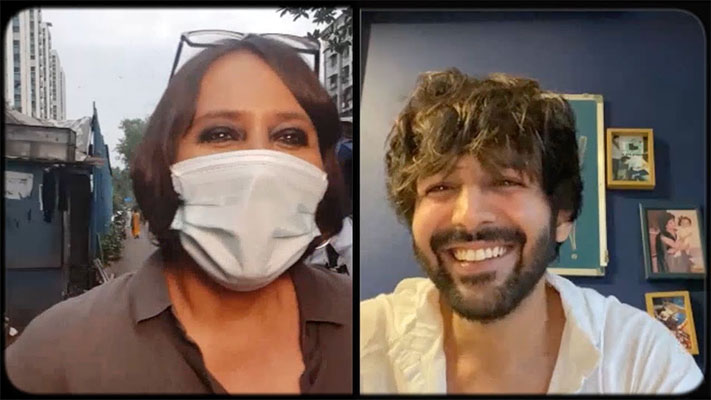 Kartik Aaryan gets in a conversation with ace journalist and frontliner Barkha Dutt. He even shares a teaser on his Instagram and captioned it saying, ‘Yeh hui na baat !! Frontliner @barkha.dutt who has been reporting on ground for over 80 Days now.’ The veteran journalist who has educated all of us time and again with her smart and correct reporting graces the latest episode of the actor’s chat show.

For those who don’t know Barkha Dutt has been reporting the pandemic on ground pan-India for almost 80 days and Kartik Aaryan, who’s the most alert and the brightest young actor we have in the industry couldn’t stop raving about her selfless act. Kartik praised her great work and asked her such correct questions that we got an insight in the aftermath of the lockdown and the increasing cases of lockdown.

The journalist rightly spoke about the migrant workers issues, the health workers who are facing stigma and even the lack of volunteers at places where COVID-19 patients are treated. The actor’s questions are so on point that even Barkha Dutt is amazed and asks him that he’s doing a good job with his question and that he should take her job.

As usual, Kartik Aaryan adds a dash of humour in his episode by asking Barkha Dutt that does he deserve a Padmashri Award for his acting. He even asks her which leading lady in Bollywood would be suitable for her biopic and gives her options. While initially Barkha is reluctant to answer, she takes Alia Bhatt’s name.

The actor’s myth vs fact session in the episode is yet again the USP and even he asks the reporter that does Kartik Aaryan deserve Bharat Ratna for Koki Poochega and the reporter is left in splits. Trust this actor to amaze us and surprise with every episode of his and this time he just bowls us over. So don’t waste time and check out this episode now.