The 32-year-old partnership, formed in 1990 with Aashiqui, between T-Series and Vinesh Films continues with their new project, Aashiqui 3. Producers Mukesh Bhatt and Bhushan Kumar are set to reunite for much anticipated third instalment of the Aashiqui franchise with director Anurag Basu. The music will be scored by Pritam and the film will star Kartik Aaryan in the lead. The team began the collaboration on a positive and spiritual note by seeking Ganesha’s blessings during Ganeshotsav. 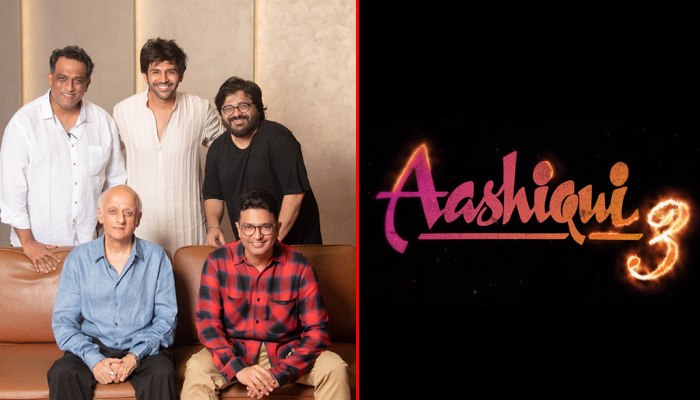 Kartik Aaryan said, “The timeless classic ‘Aashiqui’ is something I grew up watching and working on ‘Aashiqui 3’ is like a dream come true. I feel privileged yet grateful collaborating with Bhushan Kumar and Mukesh Bhatt for this opportunity. I’ve been a big fan of Anurag Basu’s work and collaborating with him on this one will definitely shape me in many ways,”.

Producer Bhushan Kumar, who also worked with Kartik in Bhool Bhulaiyaa 2, said, “The movies whose storyline and music etched our hearts, its time to relive it again. We are ecstatic to announce ‘Aashiqui 3’ in collaboration with Mukesh Bhatt, directed by my all time favorite Anurag Basu. The film is sure to have a fresh side to it while retaining the true essence. We couldn’t have found an actor better than Kartik, a true rockstar in all sense after the massive hits he has delivered; he truly fits to a T. Music is an intergral part of this romantic musical, and along with Pritam we aim to raise the bar higher. Working with such a dream team is something I look for ward to. I can’t wait to recreate the magic again.”

‘Aashiqui’ in 1990 starred Rahul Roy and Anu Aggarwal. It told the story of an aspiring singer who meets a beautiful woman unexpectedly in a police station. Its sequel ‘Aashiqui 2’, which starred Shraddha Kapoor and Aditya Roy Kapoor, was tagged a blockbuster when it was released in 2013.

Kartik has recently started the shoot of Satyaprem Ki Katha with Kiara Advani.He will also be seen in Freddy, Shehzaada and Captain India.