On Sunday, Kartik Aaryan celebrated his 30th birthday and the actor received special wishes from Deepika Padukone. The two share a close bond and they repeatedly make it to the headlines for their fun social media banter. 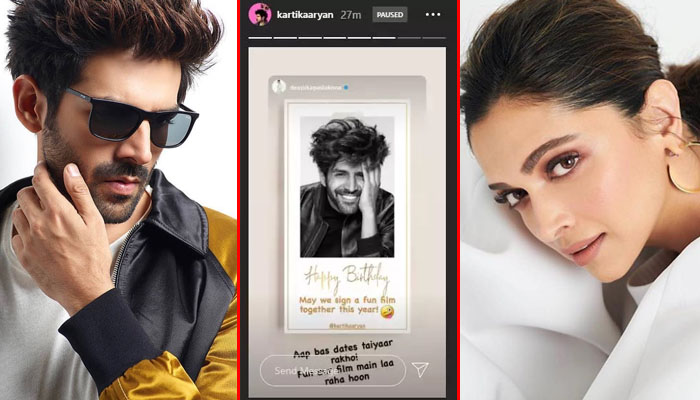 Deepika Padukone has put a picture of Karthik Aryan on the story of her Instagram account. It was written with, ‘Happy birthday, wish we could sign a funny film together this year.’ On this, Karthik Aryan replied, ‘You just keep dates ready! I am bringing in fun and film.

Meanwhile, on the professional front, Deepika has resumed shooting for Shah Rukh Khan starrer ‘Pathaan’ in Mumbai after wrapping up Shakun Batra’s untitled project with Ananya Panday and Siddhant Chaturvedi. She is also waiting for the release of Kabir Khan’s sports drama ‘83’ featuring her hubby Ranveer Singh in the lead.

Kartik has announced his next film ‘Dhamaka’ helmed by filmmaker Ram Madhvani on his birthday. Apart from this, he has several interesting films in the pipeline, including, ‘Bhool Bhulaiyaa 2’ and ‘Dostana 2’.