Kartik Aaryan constantly shares BTS pictures from the sets of Freddy, without revealing his look and also gives us glimpses of the shoot location. In the past few days he has been telling his fans and followers that the shoot for Freddy is coming to an end and how it’s making him sad and last evening the makers have finally wrapped the film and Kartik Aaryan has something special to share. 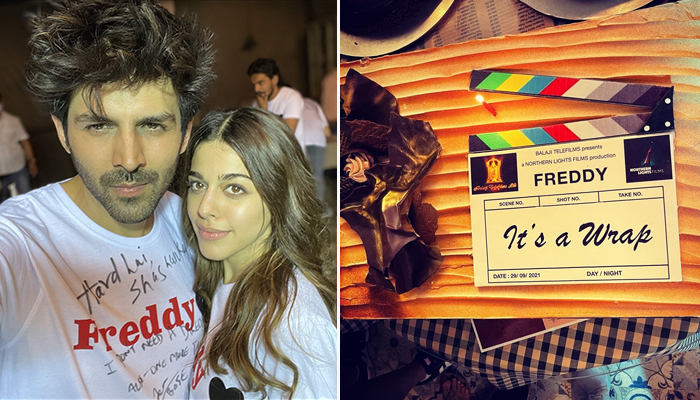 Taking to his social media, Kartik Aaryan shared, “Its a Wrap !! 🎬 A character that will always stay like a shadow with me 🖤 #Freddy will see you at the theatres 🐢.”

In the series of videos shared by the actor on Instagram, Kartik is seen wearing a white tee and so does the entire team, and we see director Shashanka Ghosh writing a note on the back of his tee.

We further see how Kartik Aaryan and the team cut a cake and there is a lot of madness on the set to the heartthrob shooting Shashanka on his mobile camera. We even see a selfie with the film’s leading lady Alaya F.

The shoot for “Freddy” commenced in August 2021. Directed by Shashanka Ghosh, the film will be produced by Ekta Kapoor and Jay Shewakramani.

Apart from Freddy, Kartik Aaryan currently has multiple films with some of the biggest banners in showbiz. After creating a frenzy with the announcement of Sajid Nadiadwala’s next, the grand musical love story, Kartik stepped into the patriotic mode with the announcement of Hansal Mehta’s Captain India. Director Anees Bazmee’s Bhool Bhulaiyaa 2, which is all set to hit the theatres on March 25, 2022.