Varun Dhawan, Aditya Roy Kapur and Sanjay Dutt starrer year’s highly awaited film Kalank is buzzing among fans since the time when it’s announcement was made. Directed by Abhishek Varman, it’s a epic period drama and scheduled to be released on April 2019. 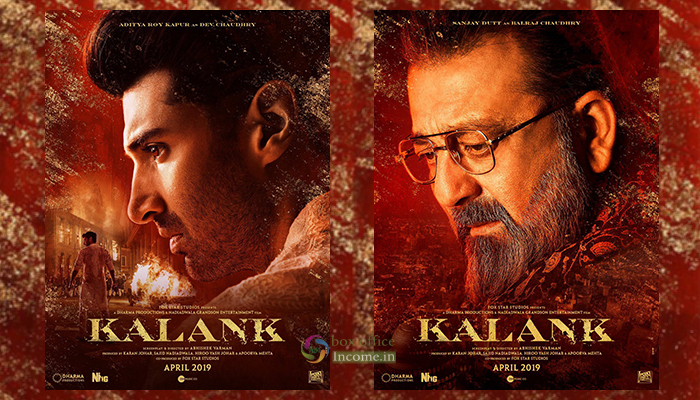 As it’s release date is coming near, Kalank is gaining more hype across the country. Fans are very much excited to see Varun Dhawan as Zafar, Aditya Roy Kapur as Dev Chaudhry and Sanjay Dutt as Balraj Chaudhry.

Coming to Aditya’s poster, he will be seen playing the role of Dev Chaudhry and we guess we will get to see something new from him in this one. His character has a virtuous heart that has an uncorrupted mind. This role might break his chocolate boy image.

Last but not least is Sanjay’s poster! He will be seen essaying the role of Balraj Chaudhry. He plays Aditya’s father in the film who has the most powerful voice amongst all. His look no different from what we have seen in the past but we never know, he can just surprise us!

All the actors are looking very promising in their characters, which has boosted the excitement of fans as well as audience to the next level. Kalank is an epic drama set in the 1940s, the film also marks the first collaboration of Fox Star Studios, Dharma Productions and Nadiadwala Grandson Entertainment.