Kabir Singh’, starring Shahid Kapoor and Kiara Advani, hits the screens today i.e 21 June 2019. This is the Hindi remake of Telugu movie Arjun Reddy is marred by predictable plot but the narrative till now is woven well. Here is our review. 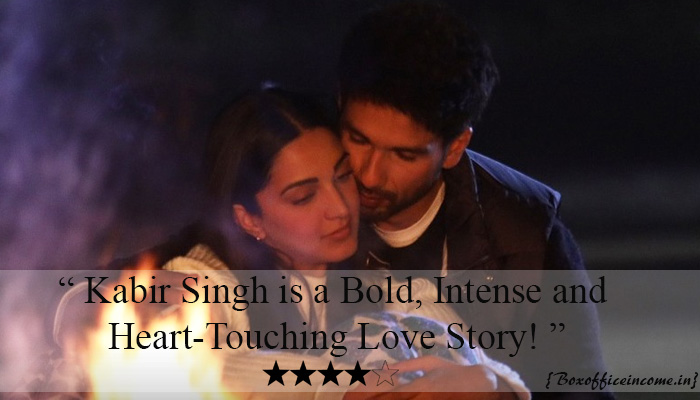 Plot:- Kabir Singh (Shahid Kapoor) is one angry young man but he’s also a brilliant surgeon & a topper of his college. In a flashback sequence, we know about what led him to this path of self-destruction He is almost expelled from college but decides to stay on (yes, the decision was up to him) when he meets Preeti (Kiara Advani).

Soon after, he pursues Preeti by ensuring that no one else is allowed to mingle with her and she takes his toxic behavior to mean “Love”. Kabir and Preeti enjoy many blissful days in college but as they get older, her father is adamant on having her marry someone else. In a sudden turn of events, Preeti is compelled to get married to one Jatinder and Kabir is unable to stop this union. What happens next forms the rest of the film.

Performance:- Acting of Shahid Kapoor is outstanding and he nailed it. He is the soul of the movie. Kiara advani is looking pretty as always and also did her work brilliantly. Nikita Dutta is sweet in the supporting role. Arjan Bajwa and Suresh Oberoi (Kabir’s father) are decent. Soham Majumdar (Shiva) has a very crucial part and is very entertaining.

Direction:- The direction of Sandeep Reddy Vanga is quite impressive, he recreated the same magic that he created in Arjun Reddy.

Music:- Music of Kabir Singh is good, it has seven songs which is composed by Mithoon, Amaal Mallik, Vishal Mishra, Sachet-Parampara and Akhil Sachdeva. Bekhayali’ is the best of the lot and very well placed in the film. Tujhe Kitna Chahne Lage’, ‘Pehla Pyaar’ and ‘Tera Ban Jaunga’ are sweet. ‘Mere Sohneya’ and Kaise Hua are good.

Final Words:- On the whole, Kabir Singh is a Bold, Intense and Heart-Touching Love Story. A brilliant moments with strong emotional quotient. This one’s an absolute must watch for the romantics.