The trailer of Dharma Production’s upcoming film, Jug Jugg Jeeyo has now been released and looks like this one’s going to be a complete family entertainer. The film starring Varun Dhawan, Kiara Advani, Anil Kapoor, Neetu Kapoor, Maniesh Paul & Prajakta Koli in lead roles seems to be a fun affair. 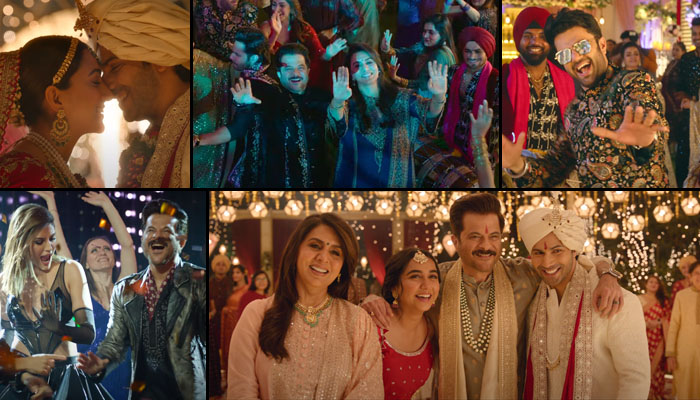 The 2 mintues and 56 seconds trailer opens with Kiara and Varun Dhawan’s wedding celebration, but things take an unexpected turn, when the now-married couple tell each other they want to end their marriage, and decide to get a divorce. Amid all this, Varun was left shocked when he discovered that even his father (Anil Kapoor) is planning to divorce his mother (Neetu Kapoor). Why? Because he is in love with somebody else (Tisca Chopra). It is then revealed that Manish Paul will be playing the role of Varun Dhawan’s brother in the movie. What follows is a tale of surprises, twists, fun, and entertainment.

Taking to their official Instagram handle, the Dharma movies shared almost a 3-minute long trailer, according to which it seems that the film would be about the complexities of relationships,wherein they captioned it, “A family is built on love, laughter, tears, forgiveness and togetherness! Experience all of it at the same time with this special parivaar and their reunion filled with surprises! #JJJTrailer out now! #JugJuggJeeyo coming to cinemas on 24th June!”

Meanwhile, on the work front, Kiara Advani was recently seen in Bhool Bhulaiyaa 2 with Kartik Aaryan. On the other hand, Varun Dhawan will be next seen in Bhediya with Kriti Sanon. As far as Anil Kapoor is concerned, he was last seen in Thar with son Harsh Varrdhan Kapoor and Satish Kaushik.

Jug Jugg Jeeyo marks the return of Neetu Singh to the big screen after seven years. She was last seen in Besharam, which also featured her late husband, actor Rishi Kapoor, and their son Ranbir Kapoor.