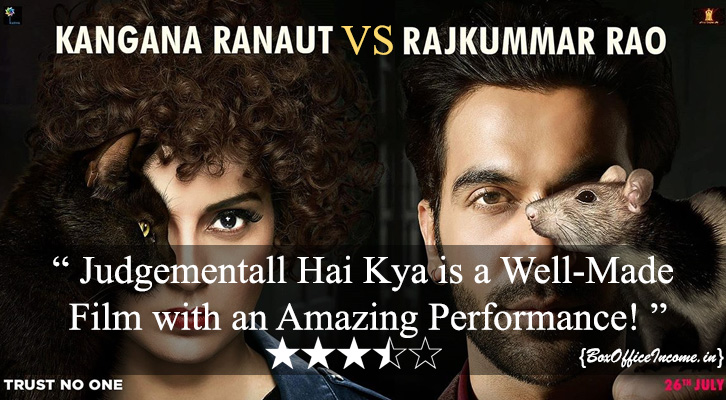 Plot:- Judgementall Hai Kya is the story of a woman with mental issues trying to solve a supposed crime. Due to a mishap in her (Kangana as Bobby) past as a child, she leads a troubled life and lives in her own world. As a result of which people around her adjudge her mentally unstable.

Her life takes a turn for worse when she rents out a part of her house to Reema (Amyra Dastur) and her husband Keshav (Rajkummar Rao). She becomes obsessed with Keshav and starts stalking him. One day, Reema dies due to a supposed fire accident. While Police too perceives it as an accident, Bobby is convinced, Reema is murdered by her husband Keshav. What happens next forms the rest of the story.

Direction:- The direction of Prakash Kovelamudi is fine. Meanwhile, what really works is the way Prakash presents Bobby, his lead character. Also, credit goes to writer Kanika Dhilon, script is tight and crisp.

Music:- Songs of Judgementall Hai Kya is not very great but pleasant to listen. The title song stands out but comes at a time when the film turns very bizarre. ‘Kis Raste Hai Jana’ is okay. ‘Wakhra Swag’ appears during the end credits.