Producers Bhushan Kumar and Amar Butala join hands for a family entertainer titled 100% starring John Abraham, Riteish Deshmukh, Nora Fatehi and Shehnaaz Gill. The Sajid Khan film, set against the backdrop of the big indian wedding and the crazy world of spies, promises to be a joy ride full of comedy, action and chaos. 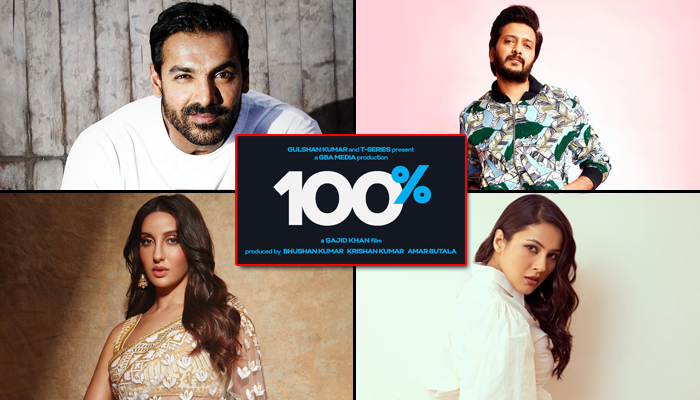 Taking to his Instagram handle, John Abraham shared the first look of the film. Although the look of the actors has not been disclosed in the first look, but we bet fans will be jumping with joy after hearing this announcement. The video says ‘20% Comedy, 20% Romance, 20% Confusion, 20% Music, 20% Action, together we’re 100%’.

Sharing this video, John wrote, “A roller coaster comedy packed with action, music and spies! We guarantee you a #100Percent entertainer!! Diwali 2023 just got bigger!! Are you ready??”

The film will also mark Sajid Khan’s comeback as a director after he was accused of Me Too by several actors.

Expected to hit the floors in early 2023, John, Riteish, Nora and Shehnaaz starrer 100% is slated to release in Diwali 2023.