Following the success of Satyameva Jayate, John Abraham and Milap Zaveri reunite for this action-packed entertainer’s sequel. It went on floors and the shoot was completed in the midst of this pandemic and is now all gearing up for a theatrical release on November 25. 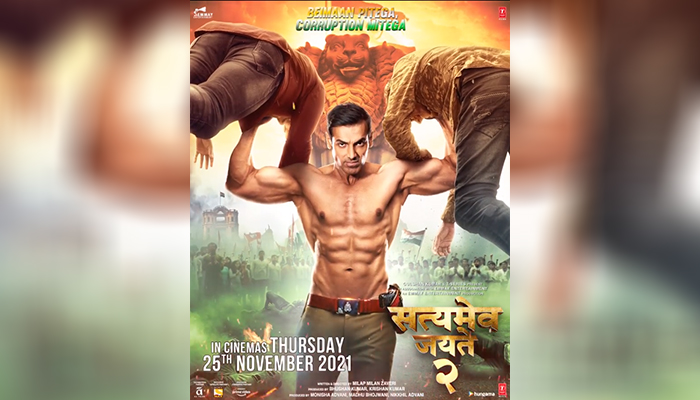 John Abraham took to social media to announce the release date of ‘Satyameva Jayate 2’. The caption of the post read, “#SatyamevaJayate2 coming to Cinemas on Thursday 25th November. Bringing double the action and entertainment in cinemas again🔥🔥 #SatyamevaJayate2, trailer out on Monday, 25th October.”

After the commercial success of Satyameva Jayate in 2018, the makers decided to take ahead the franchise ahead with Divya Khosla Kumar opposite John Abraham. While the first film dealt with just corruption, the sequel aims to tackle corruption in all spheres – from the police to politicians, industrialists, and even the common man.

Satyameva Jayate 2 revolves around the fight against injustice and misuse of power. It also stars Rajeev Pillai, Anup Soni and Sahil Vaid in pivotal roles.