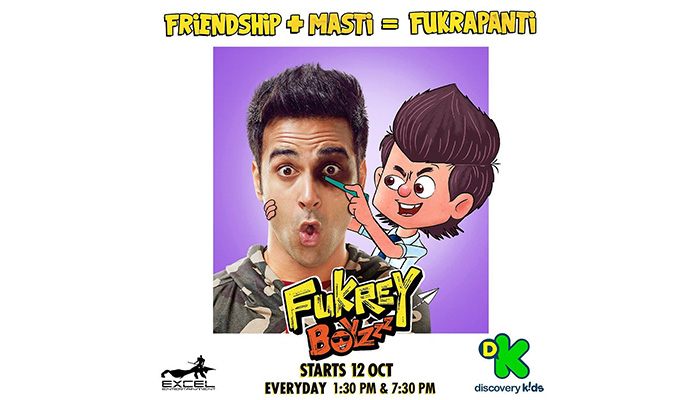 Now ‘Hunny’ is back with yet another instalment but this time it has an animated twist to it. Keeping in mind that ‘Fukrey’ and ‘Fukrey Returns’ were both received well by the audiences of different age groups be it teens or adults. The actor is back with an animated character in this series titled ‘Fukrey Boyzzz’ with specially curated content for the kids.

The series will be launched in six languages English, Hindi, Tamil, Telugu, Malayalam and Kannada. Pulkit Samrat and his Fukrey Boyzzz are ready to entertain you all and especially the kids on the 12th of October on Discovery Kids.

The franchise revolves around the life of a Hunny, Choocha, Laali and Bholi Punjaban. It stars Pulkit Samrat, Manjot Singh, Ali Fazal, Varun Sharma, Pankaj Tripathi and Richa Chadha. “Fukrey” released in 2013, and the second part “Fukrey Returns” came out in 2017. Third part is also in the pipeline.

However, ‘Fukrey Boyzzz’ is based on friendship, masti and slice of fukrapanti with quirky characters, it has the potential to expand our audience base beyond kids with parents watching the show along with them and sharing a great laugh together,” said Uttam Pal Singh, Business Head at Discovery Kids.