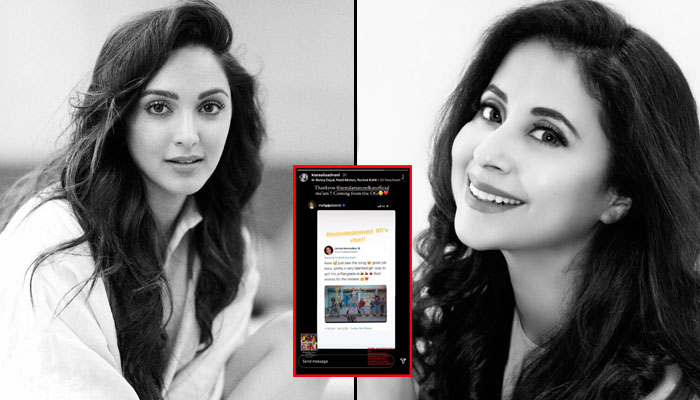 In the latest song ‘Dil Tera’ from Kiara Advani’s upcoming film Indoo Ki Jawani, the actress is seen recreating the iconic phases of Bollywood offering tribute to the most memorable moments from the past.

In a segment of the song recalling the 90s, Kiara Advani is seen dressed like Urmila Matondkar’s character in Rangeela, dancing on a ‘haathgadi’ amidst the street. The song recently received an appreciation from the OG Rangeela girl Urmila Matondkar as she shared on social media, “Aww 🥰 just saw the song 😍 great job kiara..pretty n very talented girl..way to go!! Ho ja Rangeela re💃💃💃 Best wishes for the release 🤗❤️ “.

Kiara Advani also too expressed her gratitude saying, “Thank you @urmilamatondkarofficial ma’am !! Coming from the OG😁❤️”. Indoo Ki Jawani is amongst the first big banner films headlined by an A-lister to hit the screens post the re-opening of theaters across the nation.

Banking upon the shoulders of Kiara Advani, ‘Indoo Ki Jawani’ is all set to hit the theatres on 11th December 2020.