The world’s youngest action star Tiger Shroff has garnered fame from everywhere around the globe. Tiger, who is popular for his epic action sequences in all his films is also well known for his huge fan following among girls. While boys idolize him for his great physique, girls go gaga over his goldy looks and charisma. 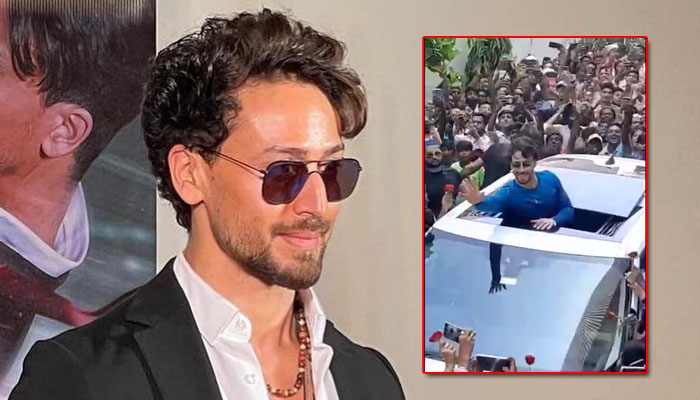 Tiger Shroff attended the screening of the second trailer from his highly anticipated film ‘Heropanti 2’ where the star was mobbed by fans as soon as he stepped into the event. Even though the screening was supposed to be held in private, the turnout of the fandom turned out to be unexpected.

The event was vivid. The fan following Tiger has in Ahmedabad was surreal. The boys were in devotion, the girls were in love. The crazy fans waited hours with roses in their hands, before Tiger arrived at the event. As Tiger maniacs surrounded the star, it took even longer for the screening to start, and hence the screening got delayed.

After films like Baaghi 2 and Baaghi 3, trio Sajid Nadiadwala, Tiger Shroff and director Ahmed Khan are now looking to push the envelope by setting a new benchmark in the action sector with the film Heropanti 2. The sequel of the blockbuster franchise is mounted on a huge budget and will exhibit a never-seen-before action.

Written by Rajat Arora and music by A R Rahman, Sajid Nadiadwala’s ‘Heropanti 2’ is directed by Ahmed Khan, who also directed Tiger’s last release ‘Baaghi 3’. The movie is scheduled to release in theatres on 29th April, 2022 on the auspicious occasion of Eid.