Trust Nawazuddin Siddiqui to spring a huge surprise on the audience and his fans every time you see him on screen. While the makers of ‘Heropanti 2’ have launched intriguing posters of the lead on-screen couple – Tiger Shroff and Tara Sutaria so far, they have recently launched a brand new poster of Nawazuddin Siddiqui’s character Laila on Wednesday on social media. 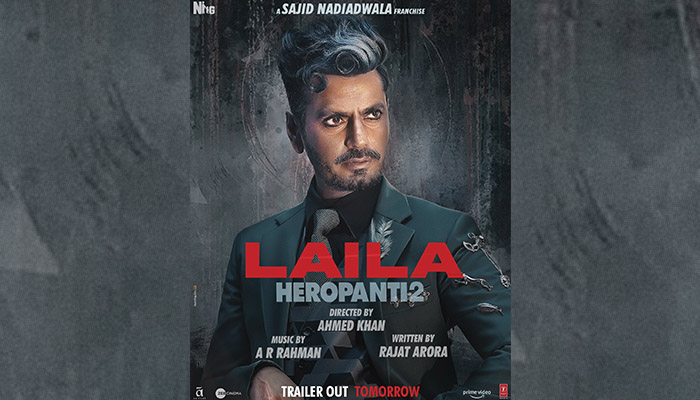 Needless to say, Nawazuddin Siddiqui as Laila shows off his swag, sporting a suited look, something that the audience and his fans have not seen him doing on screen before. The versatile actor looks suave and deadly in the poster, building the anticipation further among the audience wanting to see more. The thick dark kohl in his eyes and the grey hair has added all the drama to Nawaz’s look, making him look perfect in the character he is also set to play in this upcoming film.

After having done films such as Baaghi 2 and Baaghi 3, the trio is now looking to further push their levels and set a fresh benchmark in the action genre with Heropanti 2. This time around the sequel of the blockbuster will witness a never seen before action and entertainment and has also been mounted on a huge budget.

Heropanti 2 has been written by Rajat Arora while the music for the film has been given by legendary AR Rahman. The Ahmed Khan directorial ‘Heropanti 2’ is being bankrolled by Sajid Nadiadwala’s production house. Khan, on the other hand, had directed Tiger Shroff in his last release ‘Baaghi 3’. The film is slated for a theatrical release on April 29.

Meanwhile, Sajid Nadiadwala is also gearing up for Bachchhan Paandey, another film that is being bankrolled by his ‘Nadiadwala Grandson’ productions. Starring Akshay Kumar, Kriti Sanon and Jacqueline Fernandez in the lead roles, the film will be released in the theatres on Friday.