In June, Netflix India announced a package of entertainment consisting of 17 films that are all set to premiere directly on the digital platform in the coming few months. Ever since the OTT platform has revealed these names, Janhvi Kapoor’s Gunjan Saxena: The Kargil Girl has become the talk of the town. 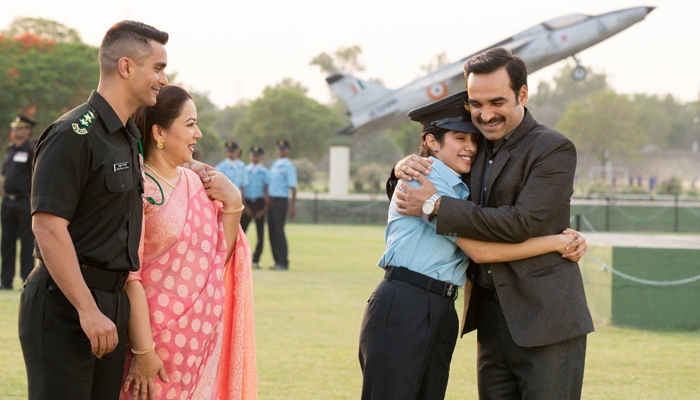 Karan Johar’s Dharma Productions and Zee Studios’ film Gunjan Saxena: The Kargil Girl is a biopic based on the Indian Air Force’s first woman pilot in combat, who played a crucial role in the 1999 Kargil War – Flight Lieutenant Gunjan Saxena. After the announcement of the movie last year, Janhvi’s fans are pretty much excited to watch her giving a tribute to the real combat warrior who has served the nation and has always empowered women.

The film also stars biggies like Angad Bedi and Pankaj Tripathi that makes it more thrilling. Karan Johar has always shown interest in periodic dramas and pro-military films that highlight our history and the army respectively. He was credited earlier for producing films like The Ghazi Attack and Kesari under his production house Dharma Productions.

Here are the six reasons to watch this biopic on a woman who played an important role in Indian history:-

1. Stellar Cast:- The success of a film is majorly dependent on its cast, and in this case, the cast amazingly fits the characters. The audience will be able to enjoy the perfect fusion between the freshness of Janhvi Kapoor, the raw talent of Angad Bedi with the years of experience that Pankaj Tripathi holds. Pankaj Tripathi, who earlier played a negative character in Netflix’s Sacred Games is back but this time in the role of a loving and caring father.

2. An Inspiring Story:- The film is based on true events from the life of IAF’s Flight Lieutenant Gunjan Saxena. Coming from an army family, Gunjan too dreamed to join the military. Her dream became true in 1994 when she cleared the Shastra Seema Bal exams. During the Kargil War in 1999, the responsibility of operation Vijay was given to Gunjan where she had to supply medicine and food to the army fighting ahead and to keep a watch on the Pakistani Army. She flew the Cheetah helicopter which was a symbol of hope for the Indian Army.

3. Enthralling Visuals:- Even though the film is not completely a war movie but it will show a few historical glimpses of Indo-Pak border from 1999’s Kargil War. As the technology has outshined the Indian Cinema in the past few years, it is for sure that it would be a treat to our eyes to see Janhvi Kapoor flying a combat Cheetah helicopter above the line of control.

4. An Emotional Father-Daughter Bond:- It is true that there is a woman behind every successful man, but it is also a fact that behind every successful woman there is a father who has supported her. Gunjan Saxena’s father was himself army personnel and he entirely supported Gunjan to achieve her goals. Being in the army for years he knew about the tension at the borders and yet sending his daughter to serve the nation on the frontline prove that he was lionhearted. While Gunjan is played by Jhanvi, Pankaj Tripathi plays the on-screen father and this bond will surely give you both tears and goosebumps.

5. Intriguing Background Music:- One of the most important elements of the films based on military events are the background music or sound effects. The script consists of love, drama, patriotism, and war sequences; all these moods are totally different and demands a different form of music. The music directors of Gunjan Saxena: The Kargil Girl have completely justified the script by providing a variety of music according to the scenes. The music when Janhvi is flying her helicopter between the mountains is absolutely intriguing.

6. Director Sharan Sharma:- Gunjan Saxena: The Kargil Girl will also mark Sharan Sharma’s directorial debut. With great script and story along with some big names like Karan Johar’s Dharma Productions, Zee Studios, and Netflix have made Sharan’s entry in the industry a memorable one. To make a film on a subject like this needs a brave heart. After watching the trailer, you can say that Sharan has flawlessly sailed the boat.

Helmed by Sharan Sharma, Gunjan Saxena will be releasing on August 12, 2020, ahead of Independence Day and we cannot wait to see Janhvi Kapoor in the character of this brave Indian Air Force pilot that made history.