Haathi Mere Saathi is coming soon; the film, which releases on 2nd April 2020, stars Rana Daggubati and Pulkit Samrat as a parallel lead, along with Zoya Hussain and Shriya Pilgaonkar in pivotal roles. In anticipation of the upcoming release, Pulkit shared a lovely video with Unni, the ‘Haathi’ from ‘Haathi Mere Saathi’. 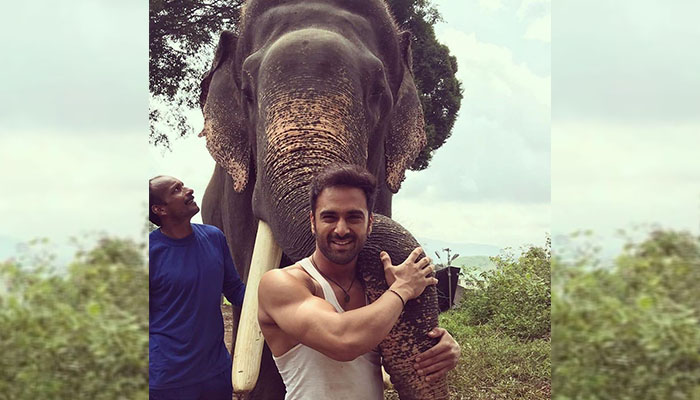 In the video, the song ‘Yaari Yaari’ can be heard playing in the background. The video highlights the friendship between Pulkit & Unni, and how it developed between them during the filming of the film. From being slightly cautious to having fun together, Pulkit and Unni’s relationship evolved beautifully.

Pulkit being comfortable with Unni was essential for his role, as in this movie he plays the role of a tribesman who dedicates his life to protecting the jungle and it’s inhabitants. Pulkit’s character Shankar works with Rana’s character Bandev to ensure that human greed does not destroy the jungle and does not harm the creatures living in it.

Pulkit has always been an animal lover, and this was a step further for him as he got to develop a personal relationship with Unni, never having been around wild animals before, this was a new experience for him and one he thoroughly enjoyed. Unni ended up being one of Pulkit’s favourite co-stars.

Pulkit always gives his all to his roles, and this time was no different. From the clothing, to the body language, to the ease with animals, he pulled out all the stops to give his character the authenticity it deserves.

This is the first time we’ll get to see Pulkit in this kind of role, as his last release was Anees Baazmee’s comedy ‘Pagalpanti’ and his next is Bejoy Nambiar’s revenge drama ‘Taish’.