Gurmeet Choudhary has been in the news for all the right reasons. Right from his film, The Wife to his commendable relief work, including the Gurmeet Choudhary Foundation launch, for COVID victims and now his song, Bedardi Se Pyaar Ka, Gurmeet surely has created waves in the industry. 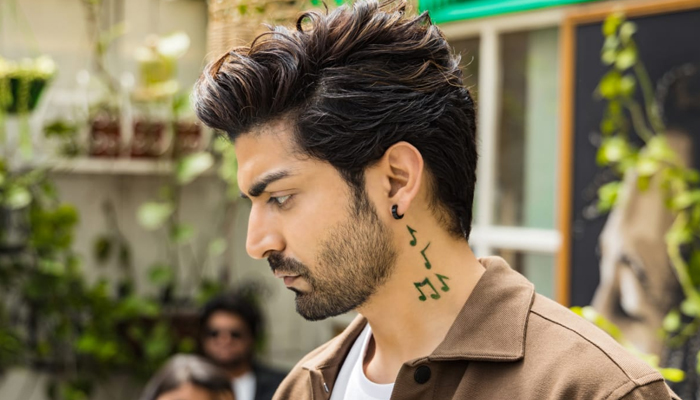 The talented actor has released a song with T-Series titled, Bedardi Se Pyaar Ka and was seen in sporting a cool tattoo! Gurmeet sent his fans in a frenzy when they saw him with a tattoo in the video and loved his versatility in looks. However, the perfectionist that he is, we hear that Gurmeet had dived into deep research on how to make his character in the song more realistic and thus had narrowed down on the temporary tattoo of music notes.

Not only that, it is said that Gurmeet did not just want to get any tattoo for the music video, he had a detail discussion with his long time makeup artist Arvind Thakur, who made this tattoo and they discussed on which design would look the most appropriate based on the look he is sporting in the song. He even went an extra mile by doing some mock shoots with different options before locking the final look.

Talking about it Gurmeet says, “This was a joint effort of my long time make up artist Arvind Thakur and myself. We sat for hours before the shoot started to discuss on different looks. He is master behind the art and had done a splendid job. It was vert difficult to everyday nail the same design but he made sure to keep it intact and not hamper on the continuity. I am so glad that the final result has come out amazing and my fans are loving it.”

The Desi Munda’s fans have loved this effort and have expressed their love for it by making reels of their favourite actor’s song and were seen sporting a mockup of Gurmeet’s tattoo in their reels! Well, with this we can surely conclude that there is a perfectionist hidden within Gurmeet Choudhary and it certainly shows in all the on screen work he essays.